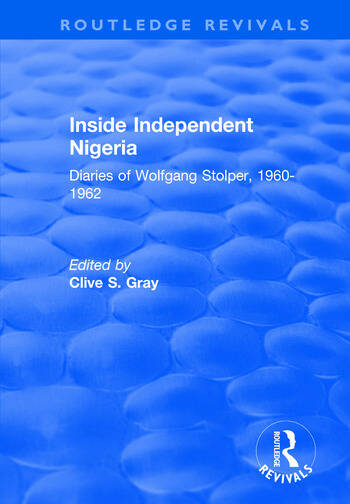 This title was first published in 2003. Wolfgang Stolper was one of the first Western economists to serve as an adviser in the government of an independent African country. In 1960 he was brought in by the Nigerian government to help shape Nigeria’s first post-independence development plan. His remarkably candid diaries chronicle his struggles and frustrations with officials, interference, waste and corruption at the heart of a government and unfolds the extraordinary story of his warmth and friendship with a country and its people. Brutally frank, compelling and disarmingly thoughtful, Inside Independent Nigeria brings to light one of the most exceptional documents on post-independence Nigeria, and delivers a fascinating picture of a pivotal era in the development of Western economic planning in Africa. No student or researcher of African political history, economics or development studies will want to be without this utterly riveting book.

’To help understand post-colonial Africa's sad failure in economic development, do read this 1960-1962 Stolper Diary: Northern economist's idealistic hopes encounter Nigerian realisms.’ Paul A. Samuelson, MIT, USA ’There have been many Western economic advisors to governments in the developing world, but few have attempted to record their experience and make it accessible to others. Wolfgang Stolper, one of America's most distinguished economists, kept a detailed diary of his experience as an advisor to Nigeria at the beginning of the 1960s. The diary is rich in detail about Nigeria at that time and about the daily work of an economic advisor. It will be of interest to anyone interested in Africa in particular and technical assistance in the developing world in general.’ Dwight H. Perkins, Harvard University, USA ’Full of vivid detail and candid commentary, Wolfgang F. Stolper's diary provides an unusually full picture of the inner workings of Nigerian policy-making and the daily experiences of a foreign economic advisor in Nigeria in the early years of Independence. Economists, historians and many others will find much of interest in this detailed portrayal, by an internationally renowned economist, of the optimism and contentiousness of early-post-Independence development planning in Africa's most populous nation.’ Sara Berry, Johns Hopkins University, USA 'Stolper's diary gives a full, blunt and honest account of the problems, many home-grown and others imported, besetting a newly independent state. But his view of Nigeria, its peoples and society, is more colourful, textured and nuanced than most, delving beneath the economic and political superstructure. And this makes his diary a fascinating and indeed essential source for th study of post-colonial Nigerian history.' South African Historical Journal