Inside the New China
An Ethnographic Memoir 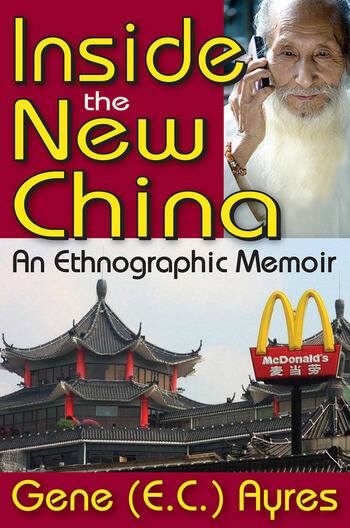 Inside the New China: An Ethnographic Memoir

China is no longer a Third World country. It is now the world's fastest growing economy. Even after the 2008 Olympics, this fact may come as a shock to many Americans, who continue to think that the Chinese still march around in brown uniforms with red stars on their caps arresting dissidents for wearing capitalist Levis. China has at last count, more than half a billion cell phone users. Indeed, the Chinese are not only the world's leading users of mobile phones, but also the leading suppliers. No Chinese student goes without one and even a donkey cart driver chatting away on a mobile is not an uncommon sight.

China's educated New Generation is possibly the most highly motivated force since the post-World War II generation in America. The young people of China are the next wave of a flourishing Chinese middle class now estimated as 13.5 % of the population, and expected to be 600 million strong by 2015, according toBusiness Week. These young people want to drive cars like ours, live in houses like ours, own condos near the beach, wear designer clothes, and carry cell phones, iPods, camcorders, digital cameras, and MP3 players, just like Americans. Tens of millions already do.

During a thirty-month stay in Chinabetween 2004 and 2007, Ayres was presented to soldiers straight out of boot camp, toasted by military generals and governors, invited to parties with local leaders as a ""foreign expert and dignitary,"" and begged to counsel dissidents and the lovelorn. He rode buses jammed with peasants hoping that they would actually be paid at the end of the month. He dickered with farmers in open markets and street vendors desperate to make ends meet. He dealt with smooth, savvy merchants in upscale department stores; and debated policy with Communist Party bosses. This revised paperback edition of the author's earlier work, A Billion to One, is a vivid, intimate account of China as it is today.

Acknowledgments
Introduction
1. The Offer
2. Sports Day in China (Part I)
3. The Governor's Banquet
4. The Young Soldiers or the Freshman Army
5. The Joke's on Wu (Gusher)
6. Rush Hour, China Style
7. The Best Medicine
8. Starving in China? Get Real
9. The Junk Food Invasion
10. Things You Won't Find in China
11. Things You Will Find in China (Like It or Not)
12. Music to Their Ears (If Not Ours)
13. Cuowu: The Mistake
14. The Author Meets a Master, and Almost His Maker
15. The Christmas Crusaders
16. A Love Story
17. The New Year Explodes
18. Shanghai'd in Beijing
19. A Hainan Fish Tale
20. Dragon Festival Day
21. You Can Get There from Here (But Try Getting Back!)
22. The Chinese Information Defi cit Disorder
23. The Children, the Children
24. Thanksgiving in Purgatory
25. No Sex Please, We're Chinese
26. Rising Nationalism as the Olympic Buildup Continues
27. The Two-Star Two-Step 1
28. The Play's the Thing
29. Media Savvy
30. Mr. Wei and the Chinese Teamsters
31. The Author Breaks a Taboo
32. The Korean Connection
33. The Russian Connection
34. Sports Day in China (Part II): A Walk in the Park
35. The Guangzhou Shuffle
36. Harbin, Fall, 2006
37. Look Homeward, Angel
Epilogue: Airports, Baggage, and People in High Places