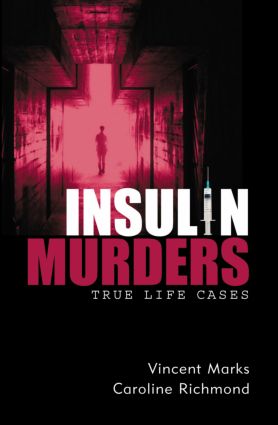 Insulin Murders is the first book on the market to describe real life cases of murder (and purported murder) using insulin (and other hypoglycaemic agents) as a murder weapon. Written by a leading authority on insulin and its use as a murder weapon, this is a gripping account of true life crime, intended for doctors and laypeople alike.

Insulin Murders is a unique collection of real life tales and includes details of the evidence that proved the innocence of Claus von Bulow, played by Jeremy Irons in the well known Hollywood film about the case, Reversal of Fortune, in the first criminal trial ever to be televised in the US.

Insulin Murders is written by Vincent Marks, author of the well-known and critically acclaimed Panic Nation and world authority on insulin, and Caroline Richmond, a well known medical journalist and writer, with a foreword by Nick Ross, journalist and broadcaster. It will appeal to both the medical and non-medical communities, and especially to all those with an interest in forensic medicine or true life crime.

One of the creepiest crime books I have ever read.
Daily Telegraph, 2007

5 Stars: A really fun read
This is all the fun of reading the very worst gruesome gory details of a murder … Anyone who feels science isn't fun should read this book. The book really does make science come alive.

5 Stars: Creepy, clinical crimes
The cases themselves are creepy and sometimes gruesome, and will appeal to anyone interested in true crime stories. Any would-be murderers considering the use of insulin should consider alternative techniques …

4 Stars: Highly technical, fascinating book
Very good read that relates many interesting and notorious cases of murders by insulin injection detected by forensic scientists, including the first author. The book is also a salutary reminder of how over-confidence in faulty scientific tests can lead to miscarriages of justice.

Vincent Marks went to on a scholarship to study medicine just after the Second World War. He became a world authority on hypoglycaemia early in his career, during which he was Professor of Clinical Biochemistry at the University of Surrey in Guildford, where he was also Dean of the Science Faculty and Founder of the . He is one of the pioneers of immunoassay and founder of the biotech company, ClifMar Associates, amongst others. He is a former President of the Association for Clinical Biochemistry and former Vice-President of The Royal College of Pathologists. He is one of the world's leading authorities on the measurement of insulin and has extensive specialist knowledge of medical research, including clinical chemistry and nutrition. Investigators worldwide call upon his expertise whenever a crime, or suspected crime, involves insulin or hypoglycaemia.

Caroline Richmond has had three careers: as a laboratory scientist in pharmacology and neurosciences; as a book editor; and as a science writer and medical journalist. She is a respected obituary writer for the British Medical Journal, The Independent and The Guardian, and also writes for the The Oldie magazine. She founded HealthWatch, which campaigns for evidence-based medicine.