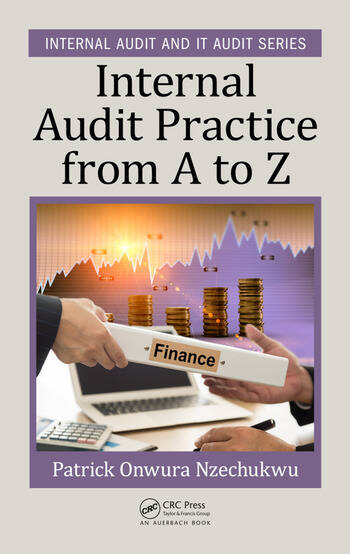 Internal Audit Practice from A to Z is

comprehensively rich, global reference is a must for public, private, NGOs, institutions—every organization.

He completed his high school (secondary school) education in 1986. He earned a national diploma in accountancy from Federal Polytechnic, Bauchi, in 1990, and a higher national diploma in accoun-tancy from Yaba College of Technology in 1994. He qualiﬁed as a chartered accountant in 2001 from the Institute of Chartered Accountants of Nigeria and earned his master’s in business administration in 2002. He also earned certiﬁca-tion in Oracle 8i Database Administration in 2002 and a certiﬁcate in computer appreciation in 1995.

He started his work career in 1995 after completing the compulsory one-year National Youth Service Corps with Equinox Petroleum & Petrochemical Co. Limited. In 2002, he joined Continental Transfert Technique Limited (CONTEC Global Ltd.), an international consultancy ﬁrm for Nigeria Immigration Service’s Combined Expatriate Residence Permit and Aliens Card (CERPAC) project, as an assistant accounts manager. In 2003, he was appointed production manager in charge of a CERPAC production center. In 2004, he was appointed as an internal auditor. Later in 2005, he became the accounts manager in charge of all CERPAC branches, including the head oﬃce (admin). In 2010, he had a stint with Continental Shipyard Limited, a joint venture partner with the Nigerian Ports Authority, as the internal audit manager. It was while in this employment that the idea of writing a book in internal auditing was conceived. Later in 2011, he joined Hitachi/Green Circle Network Africa Ltd. as the group ﬁnancial controller. He held this oﬃce until 2012, when he established his consultancy ﬁrm, Patrickonsult Limited.

Nzechukwu is a good researcher with interest on ﬁlling gaps in trending global economic issues. This trait was demonstrated when he noticed that there was no textbook by a Nigerian on internal auditing, maybe because the emphasis has been on external auditing, which has legislative backing. At that time, corrup-tion has driven the economy almost into recession. Also, internationally, there was a high level of business manipulation by managements in advanced economies, particularly in the United States. These discoveries gave rise to the writing of the ﬁrst textbook on internal auditing in Nigeria by a Nigerian. The book was struc-tured into two parts: the practice part and the study part. The practice part is being released ﬁrst, and the study part will follow later.

Nzechukwu has written an unpublished textbook on forensic accounting, Forensic Accounting, A Mirror to Financial Undercutting.

Besides his professional accounting background, he also engaged in manage-ment consulting, with particular interest on the balanced scorecard (BSC) meth-odology. This prompted his research on and writing of an unpublished textbook on BSC, Balanced Scorecard, A Tool Achieving Vision and Mission Statements.

Nzechukwu has written some articles published in LinkedIn, Facebook, ResearchGate, Academic.edu, and Global Research & Development Services (GRDS), including the following:

In furtherance to its consulting work and to fulﬁll its vision of assisting cor-porate entities attain Fortune company status, Patrickonsult Limited was incor-porated in 2012. The company is a partnership with some foreign ﬁrms to form a consortium of international ﬁrms. The consortium ﬁrm was established in pursuit of the vision of assisting corporate entities in Nigeria to attain Fortune company status through service delivery and training in corporate governance, risk manage-ment and compliance, strategy, and operational transformation excellence, among others. It organizes training and certiﬁcations on BSC, Lean Six Sigma, big data predictive analytics, net promoter score, leadership development, and project man-agement, among others. The consultancy specializes on the strategy and process excellence transformation domain.