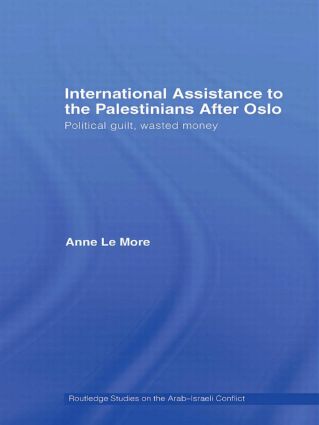 International Assistance to the Palestinians after Oslo

Why has the West disbursed vertiginous sums of money to the Palestinians after Oslo? What have been donors’ motivations and above all the political consequences of the funds spent?

Based on original academic research and first hand evidence, this book examines the interface between diplomacy and international assistance during the Oslo years and the intifada. By exploring the politics of international aid to the Palestinians between the creation of the Palestinian Authority and the death of President Arafat (1994-2004), Anne Le More reveals the reasons why foreign aid was not more beneficial, uncovering a context where funds from the international community was poured into the occupied Palestinian territory as a substitute for its lack of real diplomatic engagement. This book also highlights the perverse effects such huge amounts of money has had on the Palestinian population and territory, on Israeli policies in the occupied Palestinian territory, and not least on the conflict itself, particularly the prospect of its resolution along a two-state paradigm.

International Assistance to the Palestinians after Oslo gives a unique narrative chronology that makes this complex story easy to understand. These features make this book a classic read for both scholars and practitioners, with lessons to be learned beyond the Israeli-Palestinian conflict

'In meticulous detail, she traces the international aid effort, and identifies why it has so dramatically failed to deliver the ‘tangible results’ it once promised. Her answer is clear: heavy Palestinian dependence on the Israeli economy, coupled with Israeli policies of territorial control—illegal settlement activity, roadblocks and other mobility restrictions, and construction of the separation barrier—have made it all but impossible for the West Bank and Gaza to flourish, even with large amounts of external assistance….][…this is an excellent volume. It certainly should be required reading for anyone studying the conflict—and most especially for diplomats, aid officials and others directly involved with the issues that Le More so ably explores'- Rex Brynen, McGill University, Canada; International Affairs

"…the strength of this book lies in the breadth of analysis, its well-articulated and evidenced arguments, and its focus on the role of the four main third-party actors: the United States, the EU, the UN and the World Bank…" -- Mandy Turner, University of Brandford; International Peacekeeping Journal

'This monograph tackling the thorny question of the politics of aid in Palestine is essential reading for anyone interested in the Israeli-Palestinian conflict and, more broadly, the politics of aid in a conflict environment.]…[The message in Le More's book is as meticulous and clear as it is sobering.' - Nathalie Tocci, The International Spectator, Vol.44, No. 3, September 2009

Introduction 1. Aid Because of Politics: The Analytical, Legal and Institutional Frameworks 1.1 Analytical background: aid, politics, conflict and peacebuilding 1.2 International law, discourse, and perceptions 1.3 The aid coordination architecture: a political framework for assistance 2. Israeli Policies: The Territorial, Demographic, and Socio-Economic Fragmentation of the Occupied Palestinian Territory Territorial separation, cantonment, dispossession, and segregation 2.1 De-development and macroeconomic decline under Oslo and the intifada 2.2 The emergence of a humanitarian crisis 3. Palestinian Adjustment: The Rise and Fall of Arafat’s Regime 3.1 Authoritarianism and the personalization of power 3.2 Corruption 3.3 Security, human rights abuses, and the failure to rein in domestic opposition 4. Aid Instead of Politics: Multiple Actors, Fragmented Interests, Limited Influence 4.1 The bilateral protagonists: the US plays; the EU pays 4.2 American-European rivalry 4.3 The multilateral sponsors: the UN ‘processes’; the World Bank leads 5. Espousing Israeli Policies: Supporting the ‘Peace Process’ 5.1 Short-term fixes, political relief, and variation on a similar theme 5.2 Mitigating the socio-economic and humanitarian crises 5.3 Underwriting the process of Palestinian territorial fragmentation 6. Funding Palestinian Adjustment: Regime Creation and the Undermining of Palestinian State Building 6.1 Bailing out the PA: budget support, 1994-1998 & 2000-2005 6.2 Legitimizing the regime; de-democratizing Palestinian politics 6.3 Reforming the regime, 2002-2005 Conclusion

Anne Le More currently works for the United Nations in New York. She holds a PhD in International Relations from Oxford University. Her research interests include the Middle East, and the Arab and Muslim world more broadly. She has published a number of articles and is the co-editor of Aid, Diplomacy and Facts on the Ground: The Case of Palestine (Chatham House, London, 2005).

Routledge Studies on the Arab-Israeli Conflict

The Arab-Israeli conflict continues to be the centre of academic and popular attention. This series brings together the best of the cutting edge work now being undertaken by predominantly new and young scholars. Although largely falling within the field of political science the series also includes interdisciplinary and multidisciplinary contributions.