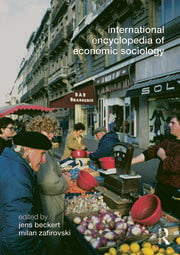 The International Encyclopedia of Economic Sociology is the first encyclopedia in the field and a timely response to the surge of interest in economic sociology over the last 30 years.

Economic Sociology deals with the multiple and complex relations between economy and society. In particular, it focuses on the impact of social, political and cultural factors on economic behaviour. The Encyclopedia gives comprehensive and accessible coverage of the wide range of areas and subjects covered by the field, including, amongst many others, such major topics as consumption, corruption, democracy and economy, ecology, embeddedness, gender and economy, globalization, industrial relations, law and economy, markets, organization theory, political economy, religion and economic life, social capital, the sociology of money, state and economy, trust, and work.

The International Encyclopedia of Economic Sociology is the much-needed major reference work on one of the richest areas of development in the social sciences in recent years. It is an extremely valuable new resource for students and researchers in sociology, economics, political science, and business, organization and management studies.

Entries are cross-referenced and carry compact bibliographies. There is a full index.

Jens Beckert is Director at the Max Plank Institute for the Study of Societies, Köln, Germany

Milan Zafirovski is Professor of Sociology at the College of Public Affairs and Community Service, University of North Texas, USA.

'Although intended for reference for students and business practitioners, the entries are of sufficient length to allow this volume to serve as a supplemental text for economic sociology classes. Entries are signed, cross-referenced and include brief bibliographies.' - Reference & Research Book News