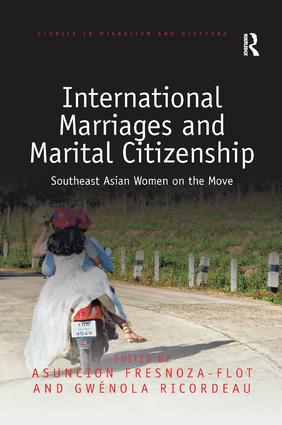 While marriage has lost its popularity in many developed countries and is no longer an obligatory path to family formation, it has gained momentum among binational couples as states reinforce their control over human migration. Focusing on the case of Southeast Asian women who have been epitomized on the global marriage market as ‘ideal’ brides and wives, this volume examines these women’s experiences of international marriage, migration, and states' governmentality.

Drawing from ethnographic research and policy analyses, this book sheds light on the way many countries in Southeast Asia and beyond have redefined marriage and national belonging through their regime of ‘marital citizenship’ (that is, a legal status granted by a state to a migrant by virtue of his/her marriage to one of its citizens). These regimes influence the familial and social incorporation of Southeast Asian migrant women, notably their access to socio-political and civic rights in their receiving countries. The case studies analysed in this volume highlight these women’s subjectivity and agency as they embrace, resist, and navigate the intricate legal and socio-cultural frameworks of citizenship.

As such, it will appeal to sociologists, geographers, socio-legal scholars, and anthropologists with interests in migration, family formation, intimate relations, and gender.

through the lens of citizenship (Asuncion Fresnoza-Flot and Gwenola Ricordeau)

Part I. Contact Paths and Routes to Family Formation

Chapter 1. Marriage Migration as a Pathway to Citizenship: Filipina Brides,

and their Mixed Unions in Belgium (Asuncion Fresnoza-Flot)

Part II. The Politics of Love and Desire

Part III. Settlement and Multifaceted Roles in a New Land

Chapter 7. Stigmatized Love and Boundary-Making: Filipina Women Constructing Relationships with US Military Men Within and Beyond the Legal Framework (Victoria Reyes)

Chapter 8. She Cares Because She is a Mother: The Intersection of Citizenship and Motherhood of Southeast Asian Immigrant Women in Taiwan (Isabelle Cheng)

Asuncion Fresnoza-Flot is a Radboud Excellence Initiative fellow at the Centre for Migration Law / Institute for the Sociology of Law of Radboud University, the Netherlands.

Gwénola Ricordeau is Associate Professor of sociology at the Lille Center for Sociological and Economic Research (CLERSE) of the University Lille 1, France.

Series now in its 20th year

Studies in Migration and Diaspora is a series designed to showcase the interdisciplinary and multidisciplinary nature of research in this important field. Volumes in the series cover local, national and global issues and engage with both historical and contemporary events. The books will appeal to scholars, students and all those engaged in the study of migration and diaspora. Amongst the topics covered are minority ethnic relations, transnational movements and the cultural, social and political implications of moving from 'over there', to 'over here'.

For a limited time only, get 20% off the series with discount code ET20*

* Offer cannot be used in conjunction with any other offer or discount and only applies to books purchased directly via our website.