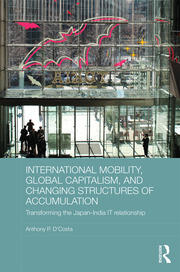 International mobility is not a new concept as people have moved throughout history, voluntarily and forcibly, for personal, familial, economic, political, and professional reasons. Yet, the mobility of technical talent in the global economy is relatively new, largely voluntary, structurally determined by market forces, and influenced by immigration policies.

With over a decade’s worth of extensive research in India, Japan, Finland, and Singapore, this book provides an alternative understanding of how capitalism functions at the global level by specifically analyzing the international movement of technical professionals between India and Japan. There are three factors that inform this study: the services transition away from manufacturing, the movement of technical professionals in the world economy, and the demographic crisis facing Japan. The dynamics of changing capitalism are examined by theorizing the emergence of the services sector in the USA and Japan, analyzing the pronounced social inequality in India that is the basis for the global supply of highly skilled technical professionals, and providing considerable empirical data on the flows of professionals to these two countries to indicate Japan’s institutional inflexibility in accommodating foreign talent. The author anticipates that Japanese industry will shed some of its institutional rigidity due to the pressures of competition and the scarcity of technical professionals.

Providing a wealth of information on the topic of international mobility, this book is an essential addition for scholars and students in the field of International Development, Business Studies, Asian Studies, Migration Studies, and Political Economy.

Anthony P. D'Costa is Chair and Professor of Contemporary Indian Studies and teaches in the Development Studies Program, University of Melbourne, Australia. He has written extensively on the political economy of steel, auto, and IT industries and continues to expand on the themes of capitalism, globalization, development, industrial restructuring, and changing labor markets. His latest publication is an edited book "After-Development Dynamics: South Korea’s Engagement with Contemporary Asia."

This perceptive analysis of the dynamics of international mobility of IT professionals between Japan, an exemplar of developed capitalism, and India, an ambitious latecomer to industrialization and globalization, offers a rich theoretical and empirical pairing to grasp the hidden dynamics of contemporary capitalism. It also shows how two contrasting economies can achieve complementarity and contribute to a realignment of the world economy.

Anthony D’Costa’s excellent study of Indian professionals in Japan goes to the heart of global capitalism. He shows that slowly capitalist necessity is forcing Japan to open its doors to foreign professionals and accommodate institutional adjustments. This book is highly recommended for scholars, business, and government policy makers wishing to understand international migration of professionals in the context of the services revolution, Japan’s place in changing capitalist dynamics, and global uneven development.

The role of offshoring and the movement of Indian technical professionals to Japan and, in fact, all non-Anglophone nations has been ignored in academic studies. In this insightful book, Anthony D’Costa fills this major gap and argues that Japan must reorient its institutions and policies to be congruent with the growing importance of tradable services under contemporary capitalism. I highly recommend this to all readers interested in understanding the flows of technical professionals to the non-Anglophone world.

Since the Meiji Restoration Japan has crafted social and economic institutions that have served it well for most of the past century. However, since the post-bubble crash of the late 1980s Japanese companies and the government have been unable to adjust flexibly to globalization, including the international movement of professionals. In this book Professor D'Costa marshals enough evidence to show that Japan is weighed down by closed systems and has not been able to adjust to a high value services economy by taking advantage of fast evolving Information Technologies that include attracting foreign IT professionals, including Indian professionals, who are already contributing to the Japanese economy. This is a must read for any serious business and government department that is contemplating working with foreigners and the world economy.