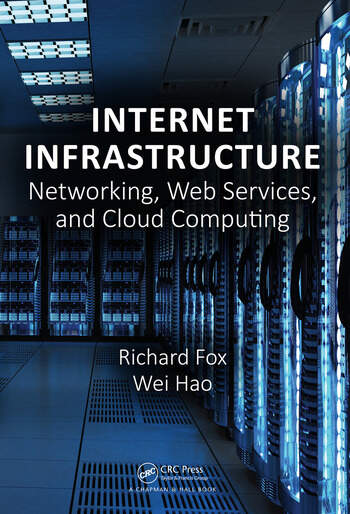 Internet Infrastructure: Networking, Web Services, and Cloud Computing provides a comprehensive introduction to networks and the Internet from several perspectives: the underlying media, the protocols, the hardware, the servers, and their uses. The material in the text is divided into concept chapters that are followed up with case study chapters that examine how to install, configure, and secure a server that offers the given service discussed.

The book covers in detail the Bind DNS name server, the Apache web server, and the Squid proxy server. It also provides background on those servers by discussing DNS, DHCP, HTTP, HTTPS, digital certificates and encryption, web caches, and the variety of protocols that support web caching.

Introductory networking content, as well as advanced Internet content, is also included in chapters on networks, LANs and WANs, TCP/IP, TCP/IP tools, cloud computing, and an examination of the Amazon Cloud Service.

Online resources include supplementary content that is available via the textbook’s companion website, as well useful resources for faculty and students alike, including: a complete lab manual; power point notes, for installing, configuring, securing and experimenting with many of the servers discussed in the text; power point notes; animation tutorials to illustrate some of the concepts; two appendices; and complete input/output listings for the example Amazon cloud operations covered in the book.

Richard Fox is a professor of computer science at Northern Kentucky University (NKU) who regularly teaches courses in both computer science and computer information technology, Dr. Fox, who has been at NKU since 2001, is the current chair of NKU’s University Curriculum Committee. Prior to NKU, Dr. Fox taught for 9 years at the University of Texas – Pan American. He has received two Teaching Excellence awards, from the University of Texas – Pan American in 2000 and from Northern Kentucky University in 2012, and NKU’s University Service award in 2016. This is Dr. Fox’s third textbook. He is also author or co-author of over 50 peer reviewed research articles, primarily in the area of Artificial Intelligence.

Wei Hao is an Associate Professor of Computer Science at Northern Kentucky University (NKU). He came to NKU in August 2008 from Cisco Systems in San Jose, California, where he worked as a software engineer. He also worked for Motorola and Alcatel, where he co-invented a patent.

Wei has 38 peer-reviewed publications in scholarly journals and conference proceedings. His research interests include Web Technologies, Cloud Computing, and Mobile Computing. He won the Faculty Excellent Performance in Scholarly or Creative Activity Award from NKU in 2012. Dr. Hao teaches a wide variety of undergraduate and graduate courses in computer science and computer information technology.