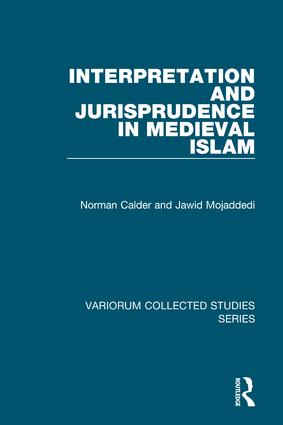 Interpretation and Jurisprudence in Medieval Islam

At the time of his death in 1998, at the age of 47, Norman Calder had become the most widely-discussed scholar in his field. This was largely focused on his monograph, Studies in Early Muslim Jurisprudence (Oxford, 1993), which boldly challenged existing theories about the origins of Islamic Law. The present volume of twenty-one of his articles and book chapters represents the full richness and diversity of Calder's oeuvre, from his initial doctoral research on Shii Islam to his later more philosophical writings on Sunni hermeneutics, in addition to his numerous studies on early Islamic history and jurisprudence. Calder's pioneering research, which was based on a sensitive reading of medieval texts fully informed by contemporary critical theory, often challenged the established assumptions of the day. He is known in particular for urging a reassessment of widely-held prejudices which underestimated the degree of creativity in medieval Islamic scholarship. Many of the articles in this volume have already become classics for the fields of Muslim jurisprudence and hermeneutics.

Contents: Introduction. Methodology: History and nostalgia: reflections on John Wansbrough's The Sectarian Milieu; The limits of Islamic orthodoxy; Law; Tafsir from Tabari to Ibn Kathir: problems in the description of a genre, illustrated with reference to the story of Abraham. Early Islam: The sa'y and the jabin: some notes on Qur'an 37:102-3; Hinth, birr, tabarrur, tahannuth: an inquiry into the Arabic vocabulary of vows; From midrash to scripture: the sacrifice of Abraham in early Islamic tradition; The ummi in early Islamic juristic literature; The qurra' and the Arabic lexicographical tradition; The Barahima: literary construct and historical reality. Jurisprudence: a) Sunnism: Ikhtilaf and ijma' in Shafi'i's Risala; The significance of the term imam in early Islamic jurisprudence; Friday Prayer and the juristic theory of government: Sarakhsi, Shirazi, Mawardi; Exploring God's Law: Muhammad ibn Ahmad ibn Abi Sahl al-Sarakhsi on zakat; al-Nawawi's typology of muftis and its significance for a general theory of Islamic Law; The 'Uqud rasm al-mufti of Ibn al-'Abidin. b) Imami Shi'ism: Zakat in Imami Shi'i jurisprudence, from the 10th to the 16th century A.D.; Khums in Imami Shi'i jurisprudence, from the 10th to the 16th century A.D.; Accommodation and revolution in Imami Shi'i jurisprudence: Khumayni and the classical tradition; Legitimacy and accommodation in Safavid Iran: the juristic theory of Muhammad Baqir al-Sabzavari (d. 1090/1679); Doubt and prerogative: the emergence of an Imami Shi'i theory of ijtihad. Indexes.

Norman Calder, who died in 1998 at the age of 47, was one of the leading scholars in the study of Islamic jurisprudence and hermeneutics. At the time of his retirement, he was Senior Lecturer in Arabic in the Department of Middle Eastern Studies, University of Manchester, UK. Jawid Mojaddedi is Assistant Professor in the Department of Religion, Rutgers University, New Brunswick, USA. Andrew Rippin is Dean in the Faculty of Humanities, University of Victoria, Canada.