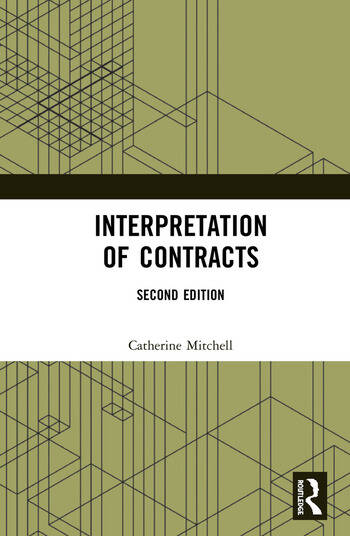 This book is a second edition of Interpretation of Contracts (2007).

The original work examined various issues surrounding the question of how contracts should be interpreted by courts, in particular focusing on the law of contract interpretation following Lord Hoffmann’s exposition of the principles of contextual interpretation in Investors Compensation Scheme Ltd v West Bromwich Building Society [1998] 1 WLR 896. As with the original, this new edition provides an overview of the subject, concentrating on elements of controversy and disagreement, rather than a detailed analysis of all the contract law rules and doctrines that might be regarded as interpretative in one sense or another. The book will be concerned with interpretation of contracts generally (following the rule that there are not different rules of interpretation for different kinds of contracts), but with reference to commercial contracts in particular, since this is the area in which the contextual interpretative approach was developed, and where it has most relevance.

The overall aim of the second edition remains the same as the first – to produce an accessible and readable guide to contract interpretation for law students, scholars and practitioners.

Chapter 1 The Nature of Contract Interpretation

A general theory of interpretation?

What is a contract?

The range of interpretation problems

Why do contractual interpretation disputes exist?

Chapter 2 The Rise (and Fall?) of Contextual Interpretation

Literalism and rules in contracts interpretation

The meaning communicated to a reasonable person

No need for ambiguity before examining the background

Mistakes can be corrected by contextual interpretation

The role of business common sense

The role of ambiguity

What the words say/what the language communicates

The limitations on the contract background

Common intentions of the parties

Admissibility of prior negotiations

Helpfulness, relevance and the legal framework

Should the rule be reformed?

The retreat from contextualism in context

Chapter 4 The Scope of Contract Interpretation

Interpretation or something else?

Connections and disconnections between interpretation

What turns on the division between implication and

The preference for formalism and textualism

The costs of contextualism

The existence of contextual materials

Courts, not the parties, interpret contracts

The limits of formalism

Choosing between formalist or contextualist contracting

Should an EAC influence interpretation?

The impossibility of dispensing with context

Catherine Mitchell is a Reader in Private Law at Birmingham Law School, University of Birmingham. She has published widely on contract law issues in the UK and internationally.