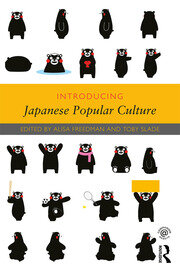 Specifically designed for use on a range of undergraduate and graduate courses, Introducing Japanese Popular Culture is a comprehensive textbook offering an up-to-date overview of a wide variety of media forms. It uses particular case studies as a way into examining the broader themes in Japanese culture and provides a thorough analysis of the historical and contemporary trends that have shaped artistic production, as well as, politics, society, and economics. As a result, more than being a time capsule of influential trends, this book teaches enduring lessons about how popular culture reflects the societies that produce and consume it.

With contributions from an international team of scholars, representing a range of disciplines from history and anthropology to art history and media studies, the book’s sections include:

Written in an accessible style by a stellar line-up of international contributors, this textbook will be essential reading for students of Japanese culture and society, Asian media and popular culture, and Asian Studies in general.

6. "The World Too Much with Us in Japanese Travel Television," Kendall Heitzman

8. "The Cute Shall Inherit the Earth: Postapocalyptic Posthumanity in Tokyo Jungle," Kathryn Hemmann

13. "Electrifying the Japanese Teenager Across Generations: The Role of the Electric Guitar in Japan’s Popular Culture," Michael Furmanovsky

17. "Korean Pop Music in Japan: Understanding the Complex Relationship Between Japan and Korea in the Popular Culture Realm," Eun-Young Jung

18. "The Prehistory of Soft Power: Godzilla, Cheese, and the American Consumption of Japan," William M. Tsutsui

21. "Apocalyptic Animation: In the Wake of Hiroshima, Nagasaki, Godzilla, and Baudrillard," Alan Cholodenko

26. "The Beautiful Men of the Inner Chamber: Gender-Bending, Boys’ Love and Other Shōjo Manga Tropes in Ōoku," Deborah Shamoon

27. "Cyborg Empiricism: The Ghost Is Not in the Shell," Thomas Lamarre

30. "Hanabi: The Cultural Significance of Fireworks in Japan," Damien Liu-Brennan

36. "Made in Japan: A New Generation Fashion Designers," Narumi Hiroshi

40. "Art from What is Already There on Naoshima and Other Islands in the Seto Inland Sea," James Jack

Alisa Freedman is an Associate Professor at the University of Oregon and Editor-in-Chief of U.S.–Japan Women’s Journal. Her publications include Tokyo in Transit: Japanese Culture on the Rails and Road (2010).

Toby Slade is an Associate Professor at the University of Tokyo. His publications include Japanese Fashion: A Cultural History (2009).