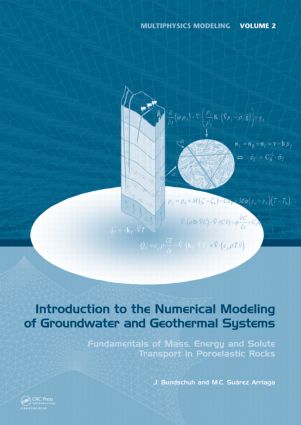 Introduction to the Numerical Modeling of Groundwater and Geothermal Systems

This book provides an introduction to the scientific fundamentals of groundwater and geothermal systems. In a simple and didactic manner the different water and energy problems existing in deformable porous rocks are explained as well as the corresponding theories and the mathematical and numerical tools that lead to modeling and solving them. This approach provides the reader with a thorough understanding of the basic physical laws of thermoporoelastic rocks, the partial differential equations representing these laws and the principal numerical methods, which allow finding approximate solutions of the corresponding mathematical models. The book also presents the form in which specific useful models can be generated and solved. The text is introductory in the sense that it explains basic themes of the systems mentioned in three areas: engineering, physics and mathematics. All the laws and equations introduced in this book are formulated carefully based on fundamental physical principles. This way, the reader will understand the key importance of mathematics applied to all the subjects. Simple models are emphasized and solved with numerous examples. For more sophisticated and advanced models the numerical techniques are described and developed carefully.

This book will serve as a synoptic compendium of the fundamentals of fluid, solute and heat transport, applicable to all types of subsurface systems, ranging from shallow aquifers down to deep geothermal reservoirs.

The book will prove to be a useful textbook to senior undergraduate and graduate students, postgraduates, professional geologists and geophysicists, engineers, mathematicians and others working in the vital areas of groundwater and geothermal resources.

1.2 The energy problem—Vision of the Intergovernmental Panel of Climate Change

1.4 Modeling needs in the context of social and economic development

1.5 The need to accelerate the use of numerical modeling of isothermal aquifers and geothermal systems

3.1 The problem of heterogeneity in aquifers

3.2 The concept of multiple porosity in heterogeneous aquifers

3.3 The triple porosity-permeability concept in geothermics

3.4 Averages of parameters at different interfaces

3.5 Averages for systems with two and three components: General models of mixtures

3.6 Some applications to field data

4.1 The conservation of mass for fluids

4.7 Flow of mass and energy in two-phase reservoirs

6 Procedure of a numerical model elaboration

6.2 Defining the objectives of the numerical model

6.6 Numerical formulation of the conceptual model

6.8 Selection of model type and code

6.11 How good is the model? Assessing uncertainties

6.13 Example of model construction—Assessment of the contamination of an aquifer

7.2 Ill-posedness of the inverse problem

8.2 Water exchange between an aquifer and a surface water body by leakage

8.3 Scenario modeling of multi-layer aquifers and distribution of groundwater ages caused by exploitation

9.1 What is geothermal energy?

9.4 The invasion of geothermal brine in oil reservoirs

A.1 Introduction to interpolation techniques

A.2 Interpolation in two and three dimensions

A.3 Elements of tensor analysis

A.4 The integral theorem of stokes

From 2001 to 2008 he worked within the framework of the German governmental cooperation (Integrated Expert Programme of CIM; GTZ/BA) as advisor in mission to Costa Rica at the ICE Instituto Costarricense de Electricidad). In 2005 he was appointed affiliate professor at the Royal Institute of Technology, Stockhom, Sweden.

Since June 2009 he is teaching and researching renewable energies, in particular geothermics, at the University of Applied Sciences in Karlsruhe

Prof. Ph.D. Mario César Suárez Arriaga (Mexico City, 1950) studied Physics and Mathematics at the National Autonomous University of Mexico (UNAM), and Applied Mathematics and Mechanics at the universities of Toulousem III and Paris VI, France (1981). He obtained his PhD in Petroleum & Geothermal Engineering at the Faculty of Engineering-UNAM (2000).

His main area of scientific research is the mathematical modeling of Complex Natural Systems. He worked several years (1982-2000) as a geothermal reservoir engineer in the Comisión Federal de Electricidad (CFE). Presently he works as Professor and Researcher of Applied Mathematics and Mechanics at the Faculty of Sciences of the Michoacan University (UMSNH) in central Mexico.

He was co-author of the book "Stories from a Heated Earth: Our Geothermal Heritage", published by the Geothermal Resources Council adn IGA (1999). He is editor of the book series "Multiphysics Modeling" and volume 1 in the series: "Numerical Modeling of Coupled Phenomena in Science and Engineering", published by CRC Press/Balkema - Taylor & Francis Group.

Book Series Editors: Jochen Bundschuh (University of Applied Sciences, Karlsruhe, Germany & Royal Institute of Technology (KTH), Stockholm , Sweden) and Mario Cesar Suarez Arriaga (Private Consultant, Morelia, Mexico).
The book series addresses novel mathematical and numerical techniques with an interdisciplinary focus that cuts across all fields of science, engineering and technology. A
unique collection of worked problems provide understanding of complicated coupled
phenomena and processes, its forecasting and approaches to problem-solving for a
diverse group of applications in physical, chemical, biological, geoscientific, medical
and other fields. The series responds to the explosively growing interest in numerical
modeling of coupled processes in general and its expansion to ever more sophisticated
physics. Examples of topics in this series include natural resources exploration and
exploitation (e.g. water resources and geothermal and petroleum reservoirs), natural
disaster risk reduction (earthquakes, volcanic eruptions, tsunamis), evaluation and
mitigation of human-induced phenomena as climate change, and optimization of
engineering systems (e.g. construction design, manufacturing processes).