Introduction to the Science of Language
In Two Volumes. Vol 2 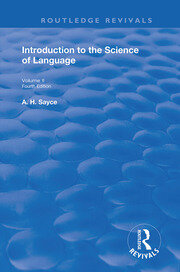 Introduction to the Science of Language: In Two Volumes. Vol 2

First published in 1900, this is the second of two volumes of the magnum opus from pioneer assyriologist and linguist Rev. Archibald Sayce and continues directly from the first, providing an introduction to linguistic roots, inflectional families of speech, agglutinative, incorporating, polysynthetic and isolating languages, comparative mythology, the science of religion, the origin of language and the relation of language to ethnology, logic and education. In it, Sayce was the first to emphasize the principle of partial assimilation and the linguistic principle of analogy. This 4th edition, ten years after the first, reflected on the limitations of science revealed since 1890, in an era when languages, like other humanities subjects, still idealised scientific approaches.

Archibald Henry Sayce was one of the greatest comparative linguists of the time, being proficient in Accadian, Arabic, Cuneiform, Chinese, Egyptian, Greek, Hebrew, Hittite, Japanese, Latin, Persian, Phoenician, Sanscrit and Sumerian. He had a good knowledge of every Semitic and Indo-European language and could write good prose in at least twenty languages. Sayce's first major contribution to scholarship was a highly significant translation of an Accadian seal, a 'bilingual text' from which to translate cuneiform, similar to the Rosetta Stone. Here then, no doubt, the reader learns from a master of comparative linguistics.

6. Roots. 7. The Inflectional Families of Speech (Aryan, Semitic, Old Egyptian, Sub-Semitic and Ethiopian, Hottentot, Alarodian). 8. The Aggutinative, Incorporating, Polysynthetic, and Isolating Languages. 9. Comparative Mythology and the Science of Religion. 10. The Origin of Language, and the Relation of the Science of Language to Ethnology, Logic, and Education.