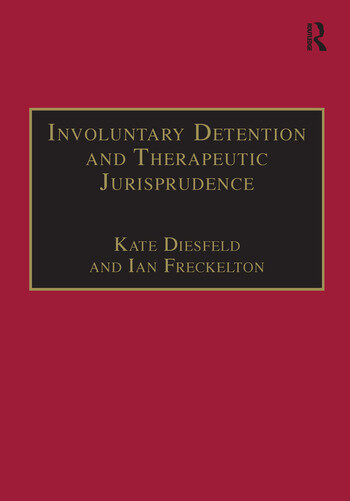 International developments within the last twenty years have demonstrated controversial shifts in treatment for people with mental illnesses and the care of persons with intellectual disabilities. These shifts have been apparent in an emphasis on deinstitutionalization, increased scrutiny of detention and discharge decisions and, in some countries, in enforced treatment and care in the community. As we become increasingly conscious of the political and moral dimensions of civil commitment, these concerns are reflected in the professional literature, but this does not often enough focus on issues of clinical and legal principle, nor is it in a form which encourages comparative analysis. This collection draws on contributors from the UK, the USA, Australia, the Netherlands, Canada and New Zealand, who share a commitment to evaluating whether the civil detention processes protect the liberty, dignity and justice interests of those with mental illnesses and intellectual disabilities. The book is written from a therapeutic jurisprudence perspective and poses a number of questions with international application, such as: Are more categories of people being detained? Is involuntary detention serving new purposes? Are different forms of detention gaining credence and being more widely utilized? And, are admission decisions and review of detention decisions transparent, consistent, and just?

Ian Freckelton is a Barrister and also a Professor at Monash University, Australia. Kate Diesfeld works at the Auckland University of Technology, New Zealand

’...Involuntary Detention and Therapeutic Jurisprudence adds an immeasurable dimension to the available international perspectives into the complexities and competing interests underpinning civil commitment processes. The quality of research and writing, and breadth of relevant backgrounds and experience of the authors will quickly establish this volume as a new "classic" in the field to all those interested in the protection of fundamental human rights, and the treatment with dignity of those with mental illnesses and intellectual disabilities.’ John Lesser, President, Mental Health Review Board of Victoria, Australia ’This is an absolutely first-rate book on civil commitment. It is a unique contribution in that it is fully international in its coverage, and thoroughly interdisciplinary in its approach. Moreover, the high-quality contributions by the individual chapter writers are given coherence by the unifying theme of a therapeutic jurisprudence approach, dramatically distinguishing this volume from the typical state-of-the-art collection. Kate Diesfeld and Ian Freckelton deserve high praise for producing an outstanding work that breaks new ground and promises to have lasting value in the field.’ Professor David B. Wexler, University of Arizona, USA and University of Puerto Rico, Puerto Rico ’...a most impressive collection of papers by most of the leading international scholars and researchers on mental health policy...the essays are of a uniformly high standard and are up-to-date in a way which is all too rare in such collections...this is one of those books of essays which will stand the tests of the passage of time and of value for money. The book is cohesive, the issues are topical, the coverage is comprehensive and the research is first class. Mental health practitioners, scholars and policy analysts should add it to their bookshelf. Mine will certainly receive regular use.’ Psychiatry, Psychology and Law 'This is without doubt a monument