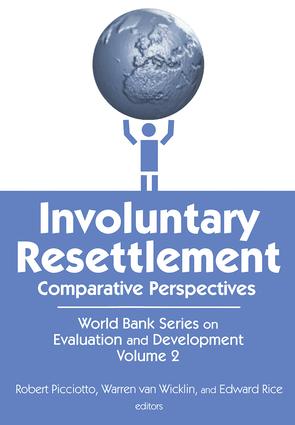 Among development assistance agencies, the World Bank has led the way in policies to mitigate the impact of large-scale engineering projects on local populations, particularly in the building of dams. Since the 1980s the Bank has implemented guidelines for policies with respect to displacement, social infrastructure and services, environmental effects, resettlement, compensation, and the restoration of income for those affected. Having learned from the failures of past resettlement programs, the Bank has endeavored to function as a responsible and caring agency. This volume builds upon earlier studies and field work to offer a broad look at dam-building projects in six countries and to review the outcomes of Bank policy, learn from experience, and assess outside criticism.

The book covers representative dam projects in India, Thailand, Togo, China, Indonesia, and Brazil. Each project was undertaken after Bank resettlement guidelines had been implemented. The widely ranging results in each country are assessed. In the areas of compensation for acquired land, relocation, infrastructure and services, the contributors note satisfactory levels of improvement or positive trends. Governments are moving towards acceptance of the idea that displaced families should be paid the real value of their lost assets. Relocation processes are now keeping pace with water movement caused by dam building, and health, education, utilities, and roads are better than before the resettlement.

Other results have been less positive. The impact on incomes of those involuntarily resettled has been harsh in some locations. Resettler dissatisfaction has been intense, notably in those countries where the national economies are not experiencing strong growth. The Bank's performance itself has been uneven. There have been lapses in appraisal and monitoring during the projects and insufficient follow-through support for resettlement operations after the completion of loan and credit disbursements.

In addition to its case by case analysis of countries and projects, the book includes detailed lessons and recommendations to strengthen resettlement policy and practice. Involuntary Resettlement will be of interest to economists, sociologists, and professionals working in regional development policy.