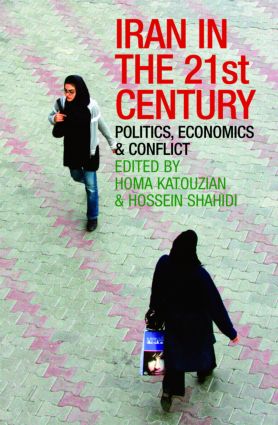 Iran in the 21st Century

Iran is an ancient country, an oil-exporting economy and an Islamic Republic. It experienced two full-scale revolutions in the twentieth century, the latter of which had large and important regional and international consequences, including an eight-year war with Saddam Hussein’s Iraq. And now in the twenty-first century, it confronts issues and experiences problems which have important implications for its future development and external relations.

Featuring outstanding contributions from leading sociologists, social anthropologists, political scientists and economists in the field of Iranian studies, this book is the first to examine Iran and its position in the contemporary world.

In developing this argument, topics examined include:

'This is a rich and important collection. The scholarship is original and of the highest quality, and the book is a must for anyone seeking to understand Iran's place in the modern world.' - Stephanie Cronin, University of Northampton, UK

'A highly significant volume and the first of its kind to introduce Iran in the 21st century, through a variety of themes with clarity and detachment. Featuring outstanding contributions written from a fresh perspective, this book stresses the vital need for reform for a complex and rapidly changing society. A must read for the study of contemporary Iran.' - Vanessa Martin, Royal Holloway, University of London, UK

'In a remarkably wide-ranging and forward-looking set of essays, the contributors to this volume – all prominent scholars in the field – offer the most comprehensive and trenchant analysis of Iran's economic, political, and cultural problems and prospects in the new century. More so than any other work on Iran after the 1979 Islamic Revolution, this book will admirably serve the needs of scholars, students, journalists, and others interested in contemporary Iran and the dilemmas that it faces in its international relations.' - Ali Banuazizi, Boston College, USA and Past President of the Middle East Studies Association

Homa Katouzian is a social scientist, historian, literary critic and poet. He is Iran Heritage Research Fellow, St. Antony’s College and Member, Faculty of Oriental Studies, University of Oxford, an honorary fellow in the Department of Politics, University of Exeter, and editor of Iranian Studies.

Hossein Shahidi teaches Communication at the American University of Beirut. He was a journalist and journalist trainer for more than twenty years, mostly at the BBC World Service, and Gender and Media Specialist with the United Nations Development Fund for Women (UNIFEM) in Afghanistan (2003-2004).