Iranian Music and Popular Entertainment
From Motrebi to Losanjelesi and Beyond 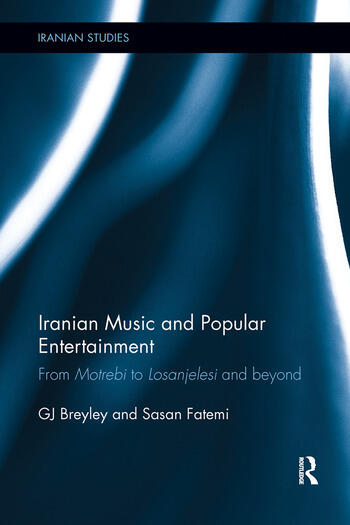 Iranian Music and Popular Entertainment: From Motrebi to Losanjelesi and Beyond

The word motreb finds its roots in the Arabic verb taraba, meaning ‘to make happy.’ Originally denoting all musicians in Iran, motrebi came to be associated, pejoratively, with the cheerful vulgarity of the lowbrow entertainer.

In Iranian Music and Popular Entertainment, GJ Breyley and Sasan Fatemi examine the historically overlooked motrebi milieu, with its marginalized characters, from luti to gardan koloft and mashti, as well as the tenacity of motreb who continued their careers against all odds. They then turn to losanjelesi, the most pervasive form of Iranian popular music that developed as motrebi declined, and related musical forms in Iran and its diasporic popular cultural centre, Los Angeles. For the first time in English, the book makes available musical transcriptions, analysis and lyrics that illustrate the complexities of this history. As it presents the findings of the authors’ years of ethnographic work with the history’s protagonists, from senior motreb to pop-rock stars, the book reveals parallels between the decline of motrebi and the rise of ‘modernity.’ In the twentieth century, the fate of Tehran’s motrebi music was shaped by the social and urban polarization that ensued from the modern market economy, and losanjelesi would be similarly affected by transnational relations, revolution, war and migration.

Foreword Anthony Shay Chapter 1: "Producing Pleasure:" Tehran’s Motreb and Ruhowzi Chapter 2: Contradictory Characters and Marginalization: From Luti to Gardan Koloft and Mashti Chapter 3: The Repertoires of Motrebi Music Chapter 4: The Evolution of the Motrebi Milieu Chapter 5: The Evolution of Iranian Popular Music Chapter 6: Before the Revolution: Television, "the West" and "Modernity" (1965-79) Chapter 7: After the Revolution: The Los Angeles Factor (1979-97) Chapter 8: Made in Iran: New Popular Music (1997-2014) Conclusion

GJ Breyley is an Australian Research Council DECRA Fellow at Monash University and convener of the Central and West Asia and Diasporas research network.

Sasan Fatemi is Associate Professor of Ethnomusicology at the University of Tehran, Iran, and editor of Mahoor Quarterly.

"An outstanding contribution to our understanding of the mediation of music...in Tehran, across significant revolutionary/social/political... periods of change" IASPM-ANZ, International Association for the Study of Popular Music, Australia New Zealand