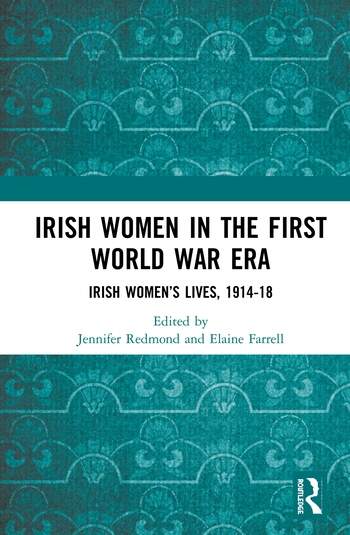 This book is the first collection of essays to focus exclusively on Irish women’s experiences in the First World War period, 1914-18, across the island of Ireland, contextualising the wartime realities of women’s lives in a changing political landscape.

The essays consider experiences ranging from the everyday realities of poverty and deprivation, to the contributions made to the war effort by women through philanthropy and by working directly with refugees. Gendered norms and assumptions about women’s behaviour are critically analysed, from the rhetoric surrounding ‘separation women’ and their use of alcohol, to the navigation of public spaces and the attempts to deter women from perceived immoral behaviour. Political life is also examined by leading scholars in the field, including accounts from women on both sides of the ‘Irish question’ and the impact the war had on their activism and ambitions. Finally, new light is shed on the experiences of women working in munitions factories around Ireland and the complexity of this work in the Irish context is explored. Throughout, it is asserted that while there were many commonalities in women’s experiences throughout the British and Irish Isles at this time, the particular political context of Ireland added a different, and in many respects an unexamined, dimension.

This book was originally published as a special issue of Women’s History Review.

1. Introduction: War Within and Without: Irish women in the First World War era

2. ‘Growing Up Poor’: child welfare, motherhood and the State during the First World War

3. Titled Women and Voluntary War Work in Ireland during the First World War: a case study of Ethel, Lady Inchiquin

4. Women and Alcohol During the First World War in Ireland

6. The Dangers and Temptations of the Street: managing female behaviour in Belfast during the First World War

Jennifer Redmond is a Lecturer in Twentieth Century Irish History at Maynooth University, Ireland, lecturing in Irish social, political, gender, and demographic history. She has published in these areas, including her monograph, Moving Histories: Irish Women’s Migration to Britain from Independence to Republic (2018).

Elaine Farrell is a Senior Lecturer in Irish Social History at Queen’s University Belfast, UK. Her research and publications have focused on gender and crime in the nineteenth and early twentieth centuries. She is currently working on the AHRC-funded ‘Bad Bridget’ project, a study of criminal and deviant Irish women in North America, 1838-1918.