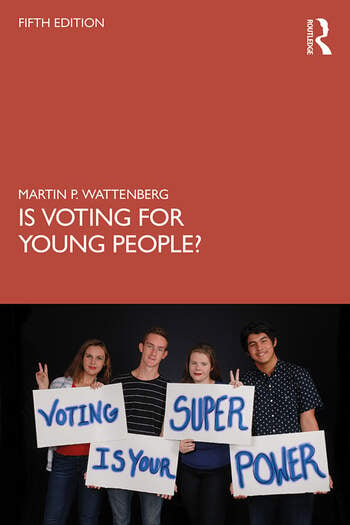 In 2016, Hillary Clinton managed to win the Democratic nomination despite losing young voters to Bernie Sanders by a margin of 73 to 26 percent. The fact that senior citizens were four times more likely to vote in the primaries than young people enabled her to survive her lack of youth appeal. But in the general election, Clinton’s problems with young people turned into her Achilles heel. Young people failed to come out to vote as much as she needed, or to support her in sufficient numbers when they did vote. What will happen in 2020, another history-making election? Already in late 2019, journalists were referring to the generation gap as "the most important divide among Democratic voters."

explores the reasons why young people are less likely to follow politics and vote in the United States (as well as in many other established democracies), no matter who the candidates are, or what the issues may be. This brief, accessible, and provocative book suggests ways of changing that.

New to the Fifth Edition

1. The Aging of Regular Newspaper Readers

2. The Aging Audience for Politics on TV

4. Where Have All the Young Voters Gone?

5. Do Young Adults See Voting as a Civic Duty?

8. Was Voting for Young People in the Obama Era?

9. Young People and Politics in the Trump Era

Martin P. Wattenberg is Professor of Political Science at the University of California, Irvine, USA.

Praise for the Fifth Edition

"This book powerfully illustrates the ways young people’s changing media habits and low voter turnout are weakening democracy. Its accessible and engaging prose, and a new chapter on the politics of young people in the Trump era, make this book both an essential and highly enjoyable read."

"Marty Wattenberg's new book is a brilliant analysis of a big and growing problem in modern democracies; it is also an urgently needed wake-up call. How can we call ourselves a democracy if fewer and fewer people participate in elections and, in addition, if these voters are far from representative of the whole population? The author's recommendations for remedial action, including the adoption of mandatory voting, deserve the most serious consideration."

"This is a fine example of putting first rate social science research in the service of larger normative concerns. Not everyone will agree with Wattenberg's prescription, but his description of the disengagement of younger citizens here and in other advanced democracies, and his explanation for their disengagement, are compelling."

"Everyone who seeks to understand today's politics and tomorrow's ought to read Martin P. Wattenberg's marvelous new book. Today's young adults are not like yesterday's. Even if you had thought they are less interested in politics and in news, you're going to be surprised by how much less involved they are. Democracy here and in Europe faces the disturbing challenge of how to get young people to take part in their governing."

"This is first-rate scholarship. Wattenberg's [book] makes an important contribution to our understanding of voter participation, while at the same time speaking directly to young people."

"This text is likely to become one of the seminal works on voting -- readers of all levels cannot help but be impressed by the clarity and strength of Wattenberg's answer to why young people do not vote, and his solution will spur debate about the meanings of democracy, rights, and responsibilities."

"Following the 2008 presidential election the dominant news narrative was that Barack Obama was carried to victory by increased turnout by engaged young voters. The virtue of research is that it assesses facts. Wattenberg carefully and thoroughly reviews the evidence and finds that the 2008 narrative was a myth. Aggregate turnout by young voters did not increase and in subsequent elections has even declined. Youth remain largely unengaged. If you wonder why Medicare and Social Security have thus far continued untouched, read this book."