Islam, Democracy and the State in Algeria
Lessons for the Western Mediterranean and Beyond 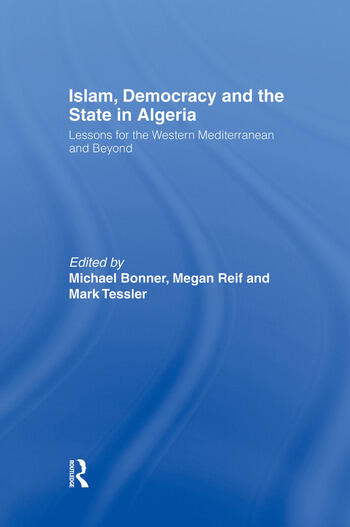 Islam, Democracy and the State in Algeria: Lessons for the Western Mediterranean and Beyond

Modern Algeria has been, in many ways, a harbinger of events and trends that have affected the Arab and Muslim worlds. The country's bold experiment in democratization broke down in the early 1990s, largely over the question of whether the Islamic Salvation Front (FIS) should be permitted to come to power following its victories in local, regional, and national elections. A devastating civil war followed. Now that order has been restored and the country has a new government, questions about governance, Islam and international relationships are once again at the top of Algeria's political agenda. How these issues are resolved will not only determine Algeria's future, but will also have important implications for other states in North Africa and the western Mediterranean.

This book was previously published as a special issue of the Journal of North African Studies.

Preface  1. Algeria at Forty: A Midlife Crisis William Zartman  Part 1: Democracy, Governance and Islam  2. Why the Violence in Algeria? Luis Martinez  3. Political Liberalization and The Islamist Movement in Algeria Azzedine Layache  4. Algeria's Transition to What? William Quandt  5. Islamist Politics and the Democratic Imperative: Comparative Lessons from the Algerian Experience John Entelis Part 2: Social and Political Economy  6. Algeria's Agonies: Oil Rent Effects in a Bunker State Clement Henry  7. Economic Reforms in Algeria: An Overview and an Assessment Kada Akacem  8. Gender as a Catalyst of Social and Political Representation in Algeria Boutheina Cheriet  9. Transitions, Youth Unemployment, Postponement of Marriage and Terrorism in Algeria: An Equation with Many Unknowns Ali Kouaouci  10. Economic Reforms in Algeria and their Impact on the Reform of Higher Education and Student Benefits Abdelbaki Benziane  Part 3: Networks and External Powers  11. What Has Become of My Friends? Fanny Colonna  12. The Resurgence of Algeria's Foreign Policy in the 21st Century Yahia H. Zoubir  13. The Barcelona Process, the Role of the European Union and the Lesson of the Western Mediterranean Fulvio Attinà  14. Algeria's Transition: Will it succeed? Have External Powers Hindered or Helped the Process? Mohammed Akacem Concluding Essay by the Editors  Contributors  Index

Michael Bonner is Associate Professor in Near Eastern Studies and History and Director, Center for Middle Eastern and North African Studies, University of Michigan, USA.

Megan Reif is a Doctoral Candidate in Political Science, University of Michigan, USA.

'The contributors constitute a veritable who's who of experts on Algeria's politics, economy, and society' - Robert Mortimer, International Journal of Middle East Studies, Vol. 39 No. 1, February 2007