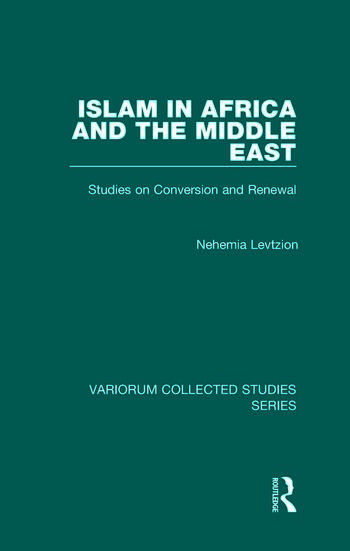 Islam in Africa and the Middle East: Studies on Conversion and Renewal

This second volume of studies by the late Nehemia Levtzion pursues the themes covered in his previous collection, Islam in West Africa; it also maintains a particular interest in the history of Africa while including broader chronological and geographic perspectives. It includes four new papers, delivered by the author in the years before his death, specially prepared for publication in this volume. In the first part, there is an emphasis on processes of conversion and Islamization, but the studies also cover Islamic perceptions of and presence in Africa; the second focuses on Islamic movements of revival and renewal, Sufism and fundamentalism.

Contents: Introduction: the legacy of Nehemia Levtzion 1935-2003; Nehemia Levtzion: bibliography and curriculum vitae. Part I History, Culture and Societies: Toward a comparative study of Islamization; Conversion under Muslim domination: a comparative study; Conversion to Islam in Syria and Palestine, and the survival of Christian communities; Aspects of Islamization: Weber's observations on Islam reconsidered; Islam in the Bilad al-Sudan to 1800; Arab geographers, the Nile, and the history of Bilad al-Sudan; Islam in African and global contexts: adventures in comparative studies of Islam; The Almoravids in the Sahara and Bilad al-Sudan: a study in Arab historiography; Slavery and the slave trade in the early states of Bilad al-Sudan. Part II Revivalism, Sufism and Fundamentalism: Religious reform in 18th-century Morocco, (with Gideon Weigert); 18th-century Sufi brotherhoods: structural, organisational and ritual changes; The Muslim holy cities as foci of Islamic revivalism in the 18th century, (with Gideon Weigert); The dynamics of Sufi brotherhoods; Resurgent Islamic fundamentalism as an integrative factor in the politics of Africa and the Middle East,; The role of Shari'a-oriented Sufi Turuq in the renewal and reform movements of the 18th and 19th centuries; Index.

’It is good to have the papers so readily available now. African Studies libraries certainly need to have a copy... Levtzion's work is solidly enough built to last not just as a monument to the man but as a resource for future students on the intellectual prowl.’ Journal of Islamic Studies 'Through the Variorum Collected Studies Series it is possible to gain insight into how particular scholars developed their ideas in specific fields of enquiry. This second collection of Nehemia Levtzion’s work is a welcome addition... an extremely important and useful collection of articles and provides a great testament to Levztion’s work.' British Journal of Middle Eastern Studies