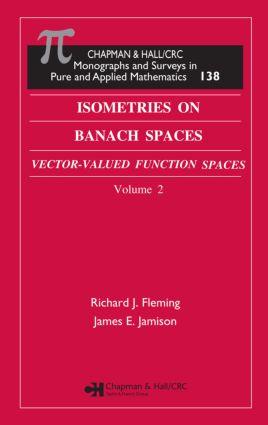 A continuation of the authors’ previous book, Isometries on Banach Spaces: Vector-valued Function Spaces and Operator Spaces, Volume Two covers much of the work that has been done on characterizing isometries on various Banach spaces.

Picking up where the first volume left off, the book begins with a chapter on the Banach–Stone property. The authors consider the case where the isometry is from C0(Q, X) to C0(K, Y) so that the property involves pairs (X, Y) of spaces. The next chapter examines spaces X for which the isometries on LP(μ, X) can be described as a generalization of the form given by Lamperti in the scalar case. The book then studies isometries on direct sums of Banach and Hilbert spaces, isometries on spaces of matrices with a variety of norms, and isometries on Schatten classes. It subsequently highlights spaces on which the group of isometries is maximal or minimal. The final chapter addresses more peripheral topics, such as adjoint abelian operators and spectral isometries.

Essentially self-contained, this reference explores a fundamental aspect of Banach space theory. Suitable for both experts and newcomers to the field, it offers many references to provide solid coverage of the literature on isometries.

"This is a well-written, highly self-contained book which presents the results and their proofs in an accessible way. The results are complemented with an interesting Notes and Remarks section at the end of each chapter which points the interested reader to paths for further investigation. An extensive bibliography is provided. The two volumes provide not only a very good introduction to the subject but also a nice reference tool for experts."

Praise for Volume One:

"This is a very well-written book. … The authors have done a remarkable job in collecting this material and in exposing it in a very clear style. It will be an important reference tool for analysts, experts, and nonexperts, and it will provide a clear and direct path to several topics of current research interest."

The Nonsurjective Case for Nice Operators

The Banach–Stone Property for Bochner Spaces

Isometries of Norm Ideals of Operators

An Infinite-Dimensional Space with Trivial Isometries

Maximal Norms and Forms of Transitivity

Reflexivity of the Isometry Group

Monographs and Surveys in Pure and Applied Mathematics