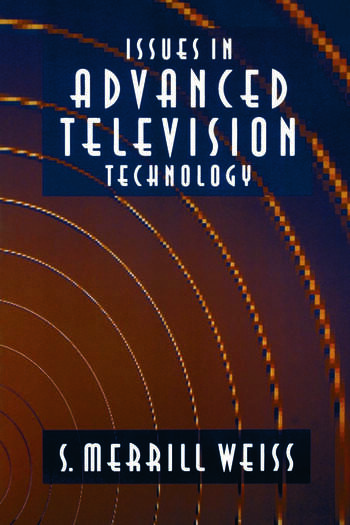 Drawn from the pages of his popular ¦Advanced Television¦ column in TV Technology magazine, Issues in Advanced Television Technology collects the new television writings of technical author S. Merrill Weiss. Noted for his relaxed, conversational style and easily understood explanations, Weiss leads the reader on an enjoyable trip through the latest developments, making highly complex subjects accessible to those with all levels of experience. His material is of value to business managers making strategic decisions, technical managers forming implementation choices, as well as system designers and operators preparing for future work assignments. Included in the discussion are the interests of broadcasting, cable, wireless cable, telcos, DBS, and packaged media. Covering the broad range of new technologies with a depth not achieved elsewhere short of textbooks, Weiss introduces subjects such as digital video compression, transmission of digital signals, audio compression, adaptive equalizers, packetization, transport and program streams, multiplexing, MPEG-2, serial digital jitter, storage and servers, data broadcasting, and the motivations of the players in the media of the future. Merill's articles are collected by many, but early back issues are no longer available. Now, get all the articles in one place, organized by topic, updated and indexed. Catch up on what you've missed! Take advantage of the easy access. Increase your knowledge. Prepare for your future. Let Issues in Advanced Television Technology take you on an exploration of the marvels of the next generation of video technology.S Merrill Weiss is an award-winning consultant in electronic media technology, technology management, and management. He has nearly three decades of personal experience developing and implementing new television technologies, participating in the writing of standards, and generally thinking about how to move the industry forward. Through his regular monthly series of articles, and now through this, his second book, he shares his understanding of where things are going.

Where to Begin?...Where Have We Been?...Where are We Going? * Into the Woods * Digital Video Compression * There's Audio in Advanced Television, Too * The Systems Layer * Transmission Planning * Distributed Transmission * Coded Orthogonal Frequency Division Multiplexing * Standard Definition Television * Widescreen 525 * Other Matters