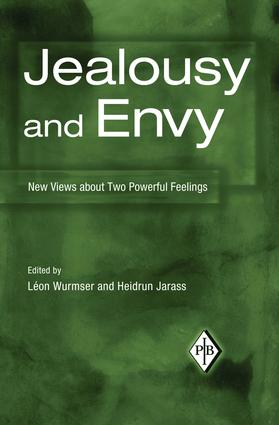 Jealousy and envy permeate the practice of psychoanalytic and psychotherapeutic work. New experience and new relevance of old but neglected ideas about these two feeling states and their origins warrant special attention, both as to theory and practice.

Their great complexity and multilayered nature are highlighted by a number of contributions: the very early inception of the "triangular" jealousy situations; the prominence of womb envy and hatred against femininity rooted in the envy of female procreativity; the role of shame and the core of both affects; the massive effects of the embodiment of these feelings in the conscience (i.e., the envious and resentful attacks by the "inner judge" against the self); the attempt to construct a cultic system of sacrifices the would countermand womb envy by an all-male cast of killing, rebirth, redemption, and blissful nourishment; and finally, the projection of envy, jealousy, and their context of shame and self-condemnation in the form of the Evil Eye.

Taken together, the contributions to the stunning and insightful volume form a broad spectrum of new insights into the dynamics of two central emotions of rivalry and their clinical and cultural relevance and application.

"This book’s quite extraordinary accomplishment derives from two factors. The authors’ editing and careful explication provide a coherent overview on the topics of envy and jealousy by defining these strong feelings thoroughly, and also differentiating them from other feelings like shame and admiration. In addition, this book helps clinicians to widen the perspective on the dynamics of envy and jealousy. Understanding both feelings in the context of oedipal and/or preoedipal conflicts enriches psychoanalytic theory and practice. This valuable book shows a great breadth of theoretical and clinical issues around envy and jealousy." - Manfred Cierpka, M.D., Director of the Institute for Family Therapy, University of Heidelberg, Germany

"Envy and jealousy, demons that inhabit the human breast and ingredients in numerous plots in film, literature, and the theater, are frequent problems in people who seek therapy. In this timely and very readable book, editors Wurmser and Jarass and contributors offer a wealth of experience, information and wisdom which should be of interest to both the professional and general reading public." - Zvi Lothane, M.D., Author, In Defense of Schreber: Soul Murder and Psychiatry (Analytic Press, 1992)

"Léon Wurmser has once more taken psychoanalysts into areas of pain and madness usually avoided. In previous work he confronted us with issues of shame, of sadomasochism, of tyrannical superego functioning, and now, with his colleague Heidrun Jarass, he challenges us to face the devastating experiences of jealousy and envy. With the participation of an impressive group of international experts, the editors help us reclaim the crucial importance of jealousy and envy in our theory and clinical work. This book is essential reading for all thoughtful students of human behavior." - Jack Novick, Ph.D., Co-author, Fearful Symmetry and Good Goodbyes

"It is not easy to comment on this rich and profound work, which deepens and enriches our understanding of two central motives and affects almost ever-present in our daily analytic and psychotherapeutic work, but there are three points which, above many other in this book, exert a lasting impression on me and will surely influence my understanding of these motivations and my clinical work profoundly: the understanding of envy and jealousy not as entities and last causes not to be further explored in their origin, but as processes; the fundamental role of shame in these processes; and the fundamental role of traumatic experiences in the development of both jealousy and envy. Especially in the contributions of the editors and main authors of this monograph, the profound psychoanalytic, developmental, and historical investigations are enlarged and explained by transparently described case-material without any obscuring overload of conceptual interpretations, which are too often found in other contemporary psychoanalytic or psychodynamic accounts. A particular merit of this book is the broad inclusion of a sociocultural and gender perspective by literature (Othello), examination of sacrifice rituals, womb envy, and especially the scrutiny on the "Evil Eye." It is not difficult to predict that this book will inspire many readers in their clinical work as well as more research on the many facets of the discussed phenomena."- Günter , Ph.D., Department for Psychosomatic Medicine and Psychotherapy, University of Göttingen, Germany

Sandler, Foreword. Wurmser, Jarass, Pathological Jealousy: The Perversion of Love. Lansky , Jealousy and Envy in Othello: Psychoanalytic Reflections on the Rivalrous Emotions. Eschbach, Womb Envy in Psychosexual Development and in the Clinical Process: An Exploratory Discussion. Shabad, Of Woman Born: Womb Envy and the Male Project of Self-creation. Jarass, Wurmser, "The Burned Hedgehog Skin": Father’s Envy and Resentment Against Women Perpetuated in the Daughter’s Superego. Janowitz , Envy of Maternal Functions in Sacrifice Rituals. Kilborne, The Evil Eye, Envy, and Shame: On Emotions and Explanation. Jarass, Wurmser, "Evil Eye" and "Searing Look": Shame, Envy and Resentment in the Magic Gaze. Morrison, Lansky, Shame and Envy. Balsam, Envy and Admiration Among Women.

Léon Wurmser, M.D., Ph.D. is a supervising and training analyst NYFS, and Clinical Professor of Psychiatry, University of West Virginia.

Like its counterpart, Psychoanalytic Inquiry: A Topical Journal for Mental Health Professionals, the Psychoanalytic Inquiry Book Series presents a diversity of subjects within a diversity of approaches to those subjects. Under the editorship of Joseph Lichtenberg, in collaboration with Melvin Bornstein and the editorial board of Psychoanalytic Inquiry, the volumes in this series strike a balance between research, theory, and clinical application. We are honored to have published the works of various innovators in psychoanalysis, such as Lachmann, Fosshage, Stolorow, Orange, Sander, Wurmser, Grotstein, Jones, Brothers, Busch, and Lichtenberg, among others.

The series includes books and monographs on mainline psychoanalytic topics, such as sexuality, narcissism, trauma, homosexuality, jealousy, envy, and varied aspects of analytic process and technique.  In our efforts to broaden the field of analytic interest, the series has incorporated and embraced innovative discoveries in infant research, self psychology, intersubjectivity, motivational systems, affects as process, responses to cancer, borderline states, contextualism, postmodernism, attachment research and theory, medication, and mentalization. As further investigations in psychoanalysis come to fruition, we seek to present them in readable, easily comprehensible writing.

After 25 years, the core vision of this series remains the investigation, analysis and discussion of developments on the cutting edge of the psychoanalytic field, inspired by a boundless spirit of inquiry.