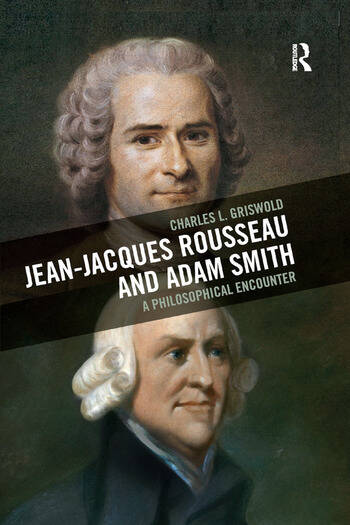 Jean-Jacques Rousseau and Adam Smith are giants of eighteenth century thought. The heated controversy provoked by their competing visions of human nature and society still resonates today. Smith himself reviewed Rousseau's Discourse on Inequality, and his perceptive remarks raise an intriguing question: what would a conversation between these two great thinkers look like?

In this outstanding book Charles Griswold analyzes, compares and evaluates some of the key ways in which Rousseau and Smith address what could be termed "the question of the self". Both thinkers discuss what we are by nature (in particular, whether we are sociable or not), who we have become, whether we can know ourselves or each other, how best to articulate the human condition, what it would mean to be free, and whether there is anything that can be done to remedy our deeply imperfect condition. In the course of examining their rich and contrasting views, Griswold puts Rousseau and Smith in dialogue by imagining what they might say in reply to one another. Griswold’s wide-ranging exploration includes discussion of issues such as narcissism, self-falsification, sympathy, the scope of philosophy, and the relation between liberty, religion and civic order.

A superb exploration of two major philosophers, Jean-Jacques Rousseau and Adam Smith: A Philosophical Encounter is essential reading for students and scholars of these two figures, eighteenth century philosophy, the Enlightenment, moral philosophy, and the history of ideas. It will also be of interest to those in related disciplines such as political theory, economics, and religion.

Prologue  1. Narcissism, self-knowledge, and social critique: from Rousseau’s Preface to Narcissus to Adam Smith  2. Genealogical narrative, self-knowledge, and the scope of philosophy  3. Sociability, pitié and sympathy  4. "To be" and "to appear": self-falsification, exchange, and freedom  5. Liberty, civil religion, and "sentiments of sociability"  Epilogue  Bibliography  Index


Charles L. Griswold is Borden Parker Bowne Professor of Philosophy at Boston University, USA. He is the author of Self-knowledge in Plato’s Phaedrus, Adam Smith and the Virtues of Enlightenment and Forgiveness: A Philosophical Exploration, editor of Platonic Writings/Platonic Readings, and co-editor (with David Konstan) of Ancient Forgiveness: Classical, Judaic, and Christian.

"This is a sophisticated, complex book. … [L]ike Griswold's other work, it will immediately become a reference that will shape future scholarship. … Rousseau scholars, Smith scholars, and anyone else interested in how these two great thinkers explored "questions of the self" will find his discussion enormously fruitful." - James R. Otteson, Notre Dame Philosophical Reviews

"As readers of Griswold’s previous work have come to expect, the treatment of each topic is erudite, detailed, and insightful. … [The book] rewards close reading with information, insight, and (hopefully) illumination." - Alexandra Oprea, EH.Net (Economic History Association)

"This is philosophy at its best. Charles Griswold has written a penetrating, scholarly and closely argued account of some of the key questions that animate the thinking of Jean-Jacques Rousseau and Adam Smith. His sophisticated engagement with Rousseau and Smith not only advances our knowledge of both figures, but also demonstrates why the problems they raise and the solutions they proffer remain important to our own contested times." - Christopher J. Berry, University of Glasgow, UK

"By constructing a series of thought-provoking dialogues between Jean-Jacques Rousseau and Adam Smith, this impressive study sheds new light on both thinkers, as well as on the character of the human self more broadly. Griswold brings to each chapter his characteristic clarity, intellectual rigor, and careful attention to the texts." - Dennis Rasmussen, Tufts University, USA

"Griswold's book makes an invaluable contribution to our understanding of the relation between Rousseau and Smith. Its sensitive reading of the relevant texts uncovers a wealth of fascinating connections between them on a variety of unexpected topics, including pity and sympathy, selfhood, narcissism, genealogy, and the relation between freedom and politics." - Frederick Neuhouser, Barnard College, USA

"This fascinating book breaks new ground on one of the most important intellectual encounters of the Enlightenment. Griswold’s original and creative dialogic treatment of the Smith-Rousseau connection takes our understanding of their relationship to new heights and new horizons. Masterful in its command of its subject, this is a work that has a tremendous amount to offer both historians of philosophy and those engaged in contemporary debates over self-knowledge." - Ryan Hanley, Marquette University, USA