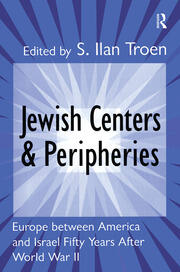 After World War II, the center of gravity for world Jewry moved outside Europe. In the aftermath of the Holocaust, large-scale emigration and postwar assimilation resulted in a disheartening contraction of European Jewry, with the notable exception of France. Today, Europe's Jews number only 17 percent of the world Jewish population. At the beginning of this century, they comprised 83 percent and were the center of the modern Jewish experience. In a radical reversal, former peripheries became the centers, notably American Jewry, the largest and most dynamic of the Diaspora communities, and the State of Israel. An examination of the altered place of Europe and its future role in Jewish history is long overdue.In Jewish Centers and Peripheries, S. Han Troen presents evidence of cultural renewal and community reorganization - both internally driven and supported by Israeli-and American-based Jewish organizations - which promise to assure the continuity and vitality of Jewish life in Europe. This volume presents the contributions of scholars, senior community professionals, lay leaders, and former diplomats from Europe, Israel, and America, including Yosef Gorny, Gabriel Sheffer, Rashid Kaplanov, Barry Kosmin, Ralph Goldman, Jean-Jacques Wahl, Israel Finestein, David Patterson, and Daniel Elazar.These original and thoughtful contributions examine dynamic relationships among European, American, and Israeli communities at times bringing personal knowledge of significant events pertinent to understanding these relationships. Collectively they suggest that present conditions are ripe for the reemergence of European Jewry, though on a scale much diminished from that of the pre-Holocaust period. Moreover, the prospects for the rejuvenation of European Jewry mirror the possibilities for Jewish continuity everywhere. Jewish Centers and Peripheries is a strikingly informative assessment of the condition of world Jewry at the close of the century.