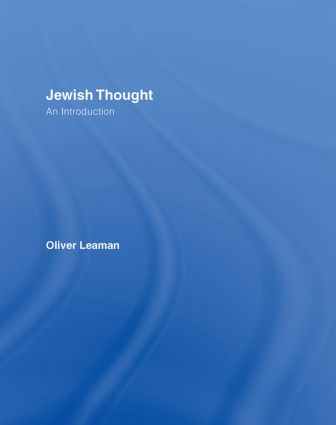 This fresh and contemporary introduction to the Jewish faith, its philosophies and worldviews, explores debates which have preoccupied Jewish thinkers over the centuries and examines their continuing influence in contemporary Judaism.

Written by Oliver Leaman, a leading figure in the field, the book surveys the central controversies in Judaism, including the protracted arguments within the religion itself. Topics range from the relations between Judaism and other religions, such as Islam and Christianity, to contemporary issues such as sex, gender and modernity. Central themes such as authority and obedience, the relations between Jewish and Greek thought, and the position and status of the State of Israel are also considered. The debates are further illustrated by reference to the Bible, as a profoundly realistic text in describing the long interaction between the Jews, their ancestors and God, as well as discussions about major thinkers, and passages from the ancient texts: The Mishnah, Talmud and Midrash.

Oliver Leaman’s lively approach and light touch makes Jewish Thought ideal reading for anyone who wants to understand more about the Jewish faith and its outlook, past and present.

'Presents a fascinating overview of Jewish thought and sensibility… For a late modern audience whose affirmations and doubts are often both equally suspended and situated in such a way as to ironically play off each other, this book serves as a superb introduction to Judaism.' - Aryeh Botwinick, Temple University, USA

1. Bible - Obedience vs. Revolt 2. Mishnah & Talmud: A View of Halakhah 3. Jews vs. Greeks 4. Jews vs. Christians 5. Karaites vs. Rabbanites 6. Jews vs. Muslims 7. Philosophers vs. Kabbalists 8. Philosophers vs. Halakhists 9. Maskilim vs. Traditionalists 10. Mitnagdim vs. Hasidim 11. Reform vs. Orthodoxy 12. Particularism vs. Universalism: Zionism vs. Anti-Zionism, Hebrew vs. Yiddish, Assimilation vs. Distinctiveness, Feminism vs. Equal but Different 13. The Future of Jewish Thought in a World without Jews. Guide to Biographical Resources