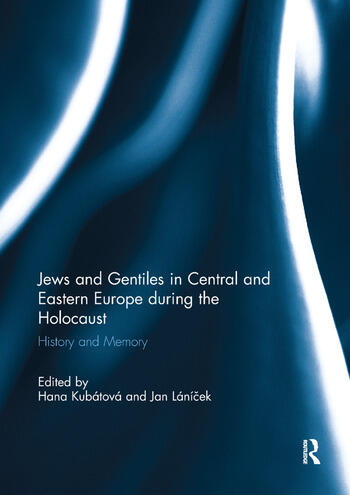 Jews and Gentiles in Central and Eastern Europe during the Holocaust: History and memory

Providing diverse insights into Jewish–Gentile relations in East Central Europe from the outbreak of the Second World War until the reestablishment of civic societies after the fall of Communism in the late 1980s, this volume brings together scholars from various disciplines – including history, sociology, political science, cultural studies, film studies and anthropology – to investigate the complexity of these relations, and their transformation, from perspectives beyond the traditional approach that deals purely with politics.

This collection thus looks for interactions between the public and private, and what is more, it does so from a still rather rare comparative perspective, both chronological and geographic. It is this interdisciplinary and comparative perspective that enables us to scrutinize the interaction between the individual majority societies and the Jewish minorities in a longer time frame, and hence we are able to revisit complex and manifold encounters between Jews and Gentiles, including but not limited to propaganda, robbery, violence but also help and rescue. In doing so, this collection challenges the representation of these encounters in post-war literature, films, and the historical consciousness. This book was originally published as a special issue of Holocaust Studies.

1. Jews and Gentiles in Central and Eastern Europe during the Holocaust in history and memory

3. Helping, denouncing, and profiteering: a process-oriented approach to Jewish–Gentile

relations in occupied Poland from a micro-historical perspective

4. Geographies of obligation and the dissemination of news of the Holocaust

5. Was the antisemitic propaganda a catalyst for tensions in the Slovak-Jewish relations?

6. Memories of the Holocaust: Slovak bystanders

7. The image of the "Jew" as an "enemy" in the propaganda of Late Stalinism and its reflection in the Czechoslovak context

9. The "Holocausts" in Greece: victim competition in the context of postwar compensation for Nazi persecution

10. Conceptions of the catastrophe: discourses on the past before the rise of Holocaust memory

11. Lamentations of a shopkeeper for his sluttish daughter? Tadeusz Borowski and His "Holocaust Socialist Realism"

12. Nontraditional images of the Holocaust in Czech literature and cinema: comedy and laughter

Hana Kubátová is an Assistant Professor at the Charles University, Prague, Czech Republic.

is a Senior Lecturer at the University of New South Wales, Sydney, Australia.

"Overall, this collection of essays provides a well-documented, multifaceted update on recent research regarding wartime Jewish–Gentile relations, how they have been “remembered” in Central and Eastern Europe, and how that memory operates today."