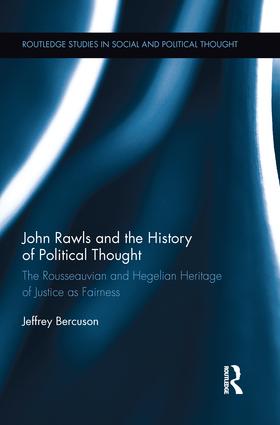 John Rawls and the History of Political Thought

The Rousseauvian and Hegelian Heritage of Justice as Fairness, 1st Edition

In this book, Jeffrey Bercuson presents the immense, and yet for the most part unrecognized, influences of Jean-Jacques Rousseau and Georg Wilhelm Friedrich Hegel on John Rawls, the most important political philosopher of the 20th century. While the well-documented influence of Immanuel Kant on Rawls is deep and profound, Kantian features and interpretation of justice as fairness do not tell the whole story about that doctrine.

Drawing on Rawls’s Lectures on the History of Moral Philosophy and his Lectures on the History of Political Philosophy, Bercuson presents the reader with a more nuanced, accurate account of the moral and political philosophy of Rawls in light of these under-appreciated influences. This new, richer image of Rawls’s political philosophy shows that Rawls’s notion of reasonableness – his notion of the kind and extent of our obligations to those fellows with whom we are engaged in social cooperation – is conspicuously more demanding, and therefore more attractive, than most interpreters and critics assume. Rawls turns to Rousseau and to Hegel, both of whom provide attractive images of engaged citizenship worthy of emulation.

Written accessibly, and contributing to key contemporary debates of global justice, this book will be read by scholars within the fields of social and political theory, ethics, and philosophy.

"Notwithstanding the massive secondary literature to date, scholars have only just begun to understand and appreciate the complexity, depth, diverse historical influences and multidimensional nature of Rawls's work. A significant and welcome addition to this recent, productive, and overdue new wave of Rawls scholarship, this volume explores

long-overlooked Rousseauian and Hegelian themes in Rawls's thought and thereby provides an important corrective to the overly Kant-centric reading of Rawls dominant in the secondary literature as well as classroom teaching. Clearly written and without excessive jargon, the volume will be read profitably by both veteran Rawls scholars and students

just coming for the first time to serious study of Rawls's work."

—David A. Reidy, University of Tennessee

"Rawls's work is much discussed but frequently misunderstood. Bercuson's work helps rectify this situation by examining Rawls's neglected intellectual debt to Rousseau and Hegel. What emerges is an account of justice as fairness animated by mutual recognition and self-respect, and a robust ethos of democratic citizenship. Bringing out the relational and communitarian aspects of Rawls's theory helps make sense of his much-criticized Law of Peoples, as well as his controversial commitment to ‘public reason.’ By reconsidering Rawls's place in the history of political thought, Bercuson makes an important contribution to contemporary debates about democratic deliberation and global justice. "

Jeffrey Bercuson is an Instructor of Political Science at the University of Toronto, Mississauga. He is currently at work on a book project that examines the role of religion in the public spheres of secular liberal polities.