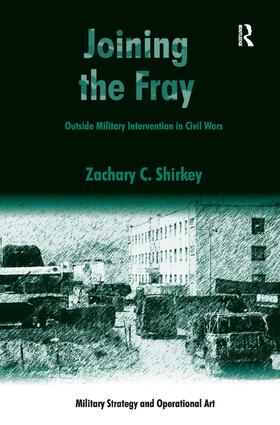 National leaders often worry that civil wars might spread, but also seem to have little grasp on which civil wars will in fact draw in other states. An ability to understand which civil wars are most likely to draw in outside powers and when this is likely to happen has important policy implications as well as simply answering a scholarly question. Joining the Fray takes existing explanations about which outside states are likely to intervene militarily in civil wars and adds to them explanations about when states join and why. Building on his earlier volume, Is this a Private Fight or Can Anybody Join?, Zachary C. Shirkey looks at how the decision to join a civil war can be intuitively understood as follows: given that remaining neutral was wise when a war began something must change in order for a country to change its beliefs about the benefits of fighting and join the war. This book studies what these changes are, focusing in particular on revealed information and commitment problems.

’Applying the insights of his first book on joining and interstate wars now to the domain of civil wars, Shirkey provides a detailed and convincing account of how revealed information and commitment problems affect intervention in civil wars. A must-read for anyone interested in understanding why civil conflicts sometimes spread and sometimes do not.’ Page Fortna, Saltzman Institute of War and Peace Studies, Columbia University, USA ’Why and when do states intervene militarily in ongoing civil wars? Through careful theorizing that highlights the role of revealed information and commitment problems, and in-depth case studies that span nearly two centuries, Shirkey provides a new answer to a question of great importance for both theory and policy. Joining the Fray is required reading for students of civil war.’ Jack S. Levy, Rutgers University, USA ’Despite their name, civil wars rarely are completely contained within a single state, a fact we often neglect. Shirkey does not. With clear logic and careful case-studies he shows that whether outsiders join is influenced by pre-existing factors, like geography, great power status and alliances, and by developments during the war, particularly surprises on the battlefield and expectations about how the winner might behave later. This is an important study.’ Robert Jervis, Columbia University, USA '… Shirkey develops a theory whose main hypothesis contends that revealed information and commitment problems account for changes in interventionist attitudes … The theory also acknowledges the role of alliances and institutional patterns of interaction, as well as elements of strategy delay. In doing so, the book becomes a significant and intellectually refreshing addition to the existing literature.' Journal of Peace Research

The Ashgate Series on Military Strategy and Operational Art analyzes and assesses the synergistic interrelationship between joint and combined military operations, national military strategy, grand strategy, and national political objectives in peacetime, as well as during periods of armed conflict. In doing so, the series highlights how various patterns of civil-military relations, as well as styles of political and military leadership influence the outcome of armed conflicts. In addition, the series highlights both the advantages and challenges associated with the joint and combined use of military forces involved in humanitarian relief, nation building, and peacekeeping operations, as well as across the spectrum of conflict extending from limited conflicts fought for limited political objectives to total war fought for unlimited objectives. Finally, the series highlights the complexity and challenges associated with insurgency and counter-insurgency operations, as well as conventional operations and operations involving the possible use of weapons of mass destruction. Scholars and practitioners in the fields of politico-military history, international relations, and national security policy are invited to contribute to this new series as well as faculty at senior and intermediate level service schools involved in professional military education.