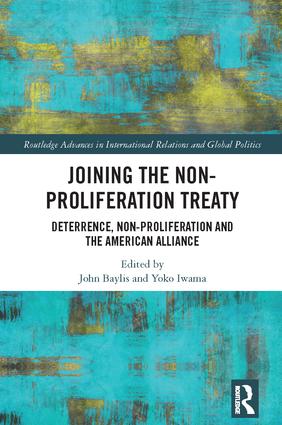 What were the calculations made by the US and its major allies in the 1960s when they faced the signing of the Non-Proliferation Treaty (NPT)? These were all states with the technological and financial capabilities to develop and possess nuclear weapons should they wish to do so. In the end, only the United Kingdom and France became nuclear weapon states. Eventually, all of them joined the non-proliferation regime.

2. After the Hegemony of the “Atoms for Peace” Programmeme: Multilateral Non-proliferation Policy under the Nixon and Ford Administrations (Shinsuke TOMOTSUGU)

3. Britain, the Deterrence/Non-Proliferation Dilemma and the NPT (John Baylis)

7. Japan’s Nuclear Disarmament and Non-Proliferation Diplomacy during the Cold War: The Myth and Reality of a Nuclear Bombed Country (Akira KUROSAKI)

8. The Japanese Ministry of Foreign Affairs and the Decision to Join the Non-Proliferation Treaty (Yoko Iwama)

9. In the Shadow of China’s Bomb: Nuclear Consultation, Commitment Reconfirmation, and Missile Defence in the U.S.-Japan Alliance, 1962-68 (Shingo Yoshida)

John Baylis is Emeritus Professor of Politics and International Relations, and a former Pro-Vice Chancellor, at Swansea University, UK.