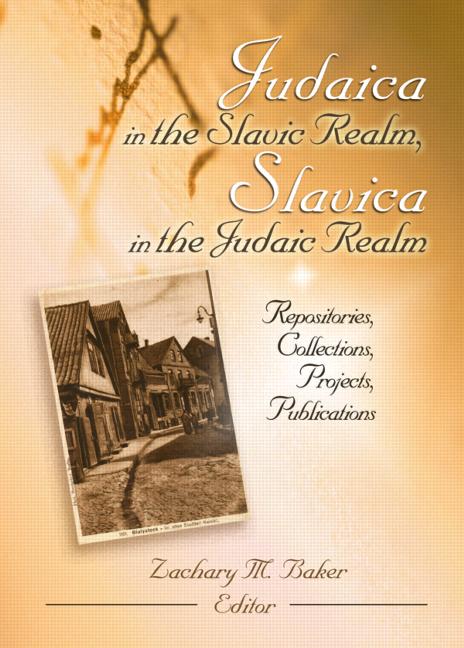 Rediscover the history that the Soviets tried to erase!

This important book addresses topics that may be unfamiliar even to specialists in Slavic or Jewish Studies. You’ll find essays, bibliographies, and research studies illustrating the state of Jewish-related publishing ventures in Eastern Europe (especially Poland) and the former Soviet Union in the post-WWII era. Judaica in the Slavic Realm, Slavica in the Judaic Realm: Repositories, Collections, Projects, Publications also documents the efforts of Judaic scholars, librarians, and genealogists to provide access to archival collections in those countries.

From the Editor:
Throughout the Cold War—i.e., during the aftermath of the Nazis’ attempt to exterminate all Jews who fell under their rule during World War II—public discussion of Jews and Judaism was virtually taboo within the Soviet Union proper, and permitted only under stringent controls in the rest of Eastern Europe. Local, regional, and geopolitics all played their parts in turning the “Jewish question” into one of the most conspicuous “blank spots” of an entire era. Until the second half of the 1980s, specialists in the Soviet Union and Eastern Europe were deprived of the most fundamental research tools—access to Judaica library and archival collections, and the opportunity to study the languages of Jewish scholarship: Hebrew, Aramaic, and Yiddish. Since then, they and their Western and Israeli counterparts have made an impressive start on filling in the blank spots, as a perusal of this book reveals, but much work remains to be done.

Judaica in the Slavic Realm, Slavica in the Judaic Realm will familiarize you with:

In addition, you’ll find three extensive bibliographies, each of which reflects rich and varied facets of the Slavic-Jewish encounter. These are: Judaica in the Slavic Realm, Slavica in the Judaic Realm is a one-of-a-kind book that no one interested in the hidden archival records of this century—and this historically significant part of the world—should be without.