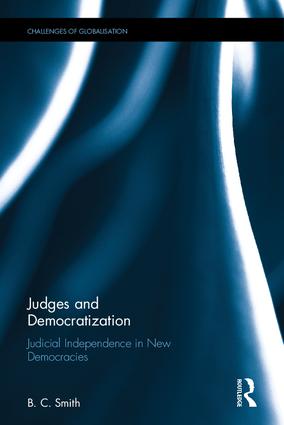 Judiciaries must be politically impartial and immune from political interference if democracy is to be consolidated in countries in transition from authoritarian rule. Without an independent judiciary there can be no rule of law, and without the rule of law there can be no democracy.

is based on the premise that democracy cannot be consolidated without the rule of law of which judicial independence is an indispensable part. It pays particular attention to the restraints placed upon judicial independence, and the reforms which are being applied, or remain to be adopted, in order to guard against the different kinds of interference which prevent judicial decisions being taken in a wholly impartial way. It examines the paradox of judicial activism arising from the independence endowed upon the judiciary by post-authoritarian constitutions. The book asks how, in the context of this endowed authority, such accountability can be made compatible with the preservation of judicial independence when the concept of an accountable, independent judiciary appears to be a contradiction in terms.

This text will be of key interest to teachers and students of politics, comparative government/politics, combined politics and law, democracy and governance, human rights and democratization, and democratic development.

1. The Rule of Law and Democracy

The Principles of the Rule of Law

The Rule of Law and Democracy

Trends in the Rule of Law

The Rule of Law and Democratic Consolidation

Democratic Constitutions and the Rule of Law

The rule of Law and Social Inequality

2. The Rule of Law and Judicial Independence

Powers of Appointment to the Judiciary

Control of the Judge’s Career

Limiting the Scope of Judicial Review

The Scope of Judicial Review

The Politics of Judicial Reform

The Executive Model of Management

The Role of Legislatures

Testing the Constitutionality of the Political Process

The Concept of Accountability

10. Conclusion: The Dilemma of Judicial Independence

The Struggle for Judicial Independence

A Universal Rule of Law

The Rule of Law’s Fragility

B. C. Smith is Emeritus Professor of Political Science and Social Policy, University of Dundee, UK.