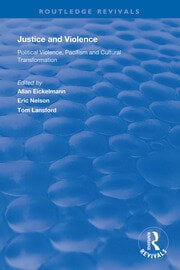 Originally published in 2003. Justice and Violence brings together a fascinating and varied volume that focuses on the ethics of both political violence and pacifism. Incorporating historical, geopolitical and cultural case studies, it takes a unique look at comparative analyses of these two phenomena and contending world views. The volume is a 'must read' for political scientists, ethicists, historians, sociologists, anthropologists and policy analysts. As we move deeper into the twenty-first century, the contradictory and conflicting forces of globalization and cultural fragmentation make it increasingly crucial to give serious consideration to the issues raised here.

Contents: Introduction, Allan Eickelmann, Tom Lansford and Eric Nelson. The Justice of Violence: Just war: an ethic of restraint or the defense of order?, Valerie O. F. Morkevicius; Moralizing the violence or a just response? the dimensions and limitations of the Bush doctrine, Chris J. Dolan; The President and the Congress in concert: declaring and making war in the United States, Susan Weldon Scott; A political calculus of apology: Japan and its neighbours, Girma Negash. Violence as Injustice: Power to destroy, power to heal: violence, State power and paradigm shifts for peace, Carol Hunter; The ethics of living American primacy, or, towards a global Jim Crow, and its discontents, Will Watson; The fist of pacifism, Angela Gordon and Tobias T. Gibson; Violence and non-violence as constitutional argument: an analysis of the 1963 civil rights demonstrations in Birmingham, Alabama, Neal Allen; 'Jack Rocks, Earrings and the Occupation of Moss #3': emblems of the struggle for decency in the Appalachian coal fields, Fred Smith. Beyond Justice and Injustice: A case of Communist indoctrination and American enticement during the Korean War, Bryan D. McKnight; From rollback to preemption: a comparison of the Reagan and Bush doctrines, Robert Pauly Jr; The 2003 U.S. Invasion of Iraq: militarism in the service of geopolitics, Edmund F. Byrne; Beyond politics, Helena Cristini; Conclusion: no clash, but dialogue among religions and nations: towards a new paradigm of international relations, Hans Küng; Select bibliography; Index.