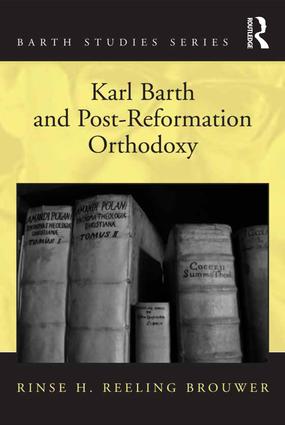 Throughout his magnum opus, Church Dogmatics, Karl Barth converses with the great theologians of post-reformation orthodoxy, quoting from works in his private collection. When Barth became Honorary Professor of Reformed Theology at the University of GÃ¶ttingen in 1921, his knowledge of the Reformed tradition was practically non-existent; he quickly amassed his collection of ancient copies in order to acquire a thorough knowledge of orthodoxy. In Karl Barth and Post-Reformation Orthodoxy, Rinse H. Reeling Brouwer identifies and discusses the sources of Barth's conversations and analyses Barth's use and (mis)understandings of them. Each chapter focuses on one of the topics in Christian Dogmatics, with the last chapter exploring the way in which Barth's role as a reader of the 19th-century writer of a textbook on Reformed Dogmatics Heinrich Heppe influenced the ultimate shaping of Church Dogmatics. Reeling Brouwer offers a major contribution to Barth scholarship and an important resource for theologians as well as historians focusing on the post-reformation protestant theology.

’In six close studies of Barth’s engagement with particular figures and movements (ranging from early scholasticism to covenant theology to rational orthodoxy), Reeling Brouwer has given us a richly detailed history of Barth’s years of apprenticeship in the school� of Reformed dogmatics. What emerges is not only a careful demonstration of the seriousness with which Barth took die Alten - and the strengths and weaknesses of his reading of them - but also a more differentiated understanding of post-Reformation Reformed theology than can be found in studies driven by the question of the relation of the Calvinists to Calvin. Reeling Brouwer is a master historian of doctrine. I recommend his work highly.’ Bruce McCormack, Princeton Theological Seminary, USA

Rinse H. Reeling Brouwer was born in 1953. He has been a minister in the Protestant Church in the Netherlands since 1982. In 1988 he defended his PhD dissertation at the University of Amsterdam on the Marquardt-thesis on socialist elements in the thinking of Karl Barth. From 1997 onwards he has taught as a senior lecturer in the History of Christian Doctrine at the Theological University of Kampen; since 2009 he has been editor of the Zeitschrift fÃ¼r dialektische Theologie; and in 2012 he became Professor at the Miskotte/Breukelman Chair at the Protestant Theological University in Amsterdam. He is the author of Dutch books on Spinoza and Reformed Theology (1998), Calvin (2004), and a textbook on the History of Systematic Theology (2009). He edited Frans H. Breukelman, The Structure of Sacred Doctrine in Calvin’s Theology (Grand Rapids, Michigan/Cambridge, UK: William B. Eerdmans, 2010).

The work of Barth is central to the history of modern western theology and remains a major voice in contemporary constructive theology. His writings have been the subject of intensive scrutiny and re-evaluation over the past two decades, notably on the part of English-language Barth scholars who have often been at the forefront of fresh interpretation and creative appropriation of his theology. Study of Barth, both by graduate students and by established scholars, is a significant enterprise; literature on him and conferences devoted to his work abound; the Karl Barth Archive in Switzerland and the Center for Barth Studies at Princeton give institutional profile to these interests. Barth's work is also considered by many to be a significant resource for the intellectual life of the churches.

Drawing from the wide pool of Barth scholarship, and including translations of Barth's works, this series aims to function as a means by which writing on Barth, of the highest scholarly calibre, can find publication. The series builds upon and furthers the interest in Barth's work in the theological academy and the church.