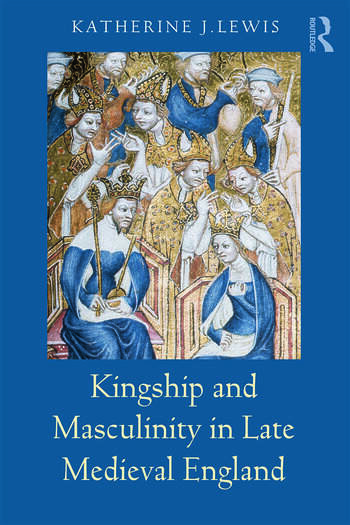 Kingship and Masculinity in Late Medieval England explores the dynamic between kingship and masculinity in fifteenth century England, with a particular focus on Henry V and Henry VI. The role of gender in the rhetoric and practice of medieval kingship is still largely unexplored by medieval historians. Discourses of masculinity informed much of the contemporary comment on fifteenth century kings, for a variety of purposes: to praise and eulogise but also to explain shortcomings and provide justification for deposition.

Katherine J. Lewis examines discourses of masculinity in relation to contemporary understandings of the nature and acquisition of manhood in the period and considers the extent to which judgements of a king’s performance were informed by his ability to embody the right balance of manly qualities. This book’s primary concern is with how these two kings were presented, represented and perceived by those around them, but it also asks how far Henry V and Henry VI can be said to have understood the importance of personifying a particular brand of masculinity in their performance of kingship and of meeting the expectations of their subjects in this respect. It explores the extent to which their established reputations as inherently ‘manly’ and ‘unmanly’ kings were the product of their handling of political circumstances, but owed something to factors beyond their immediate control as well. Consideration is also given to Margaret of Anjou’s manipulation of ideologies of kingship and manhood in response to her husband’s incapacity, and the ramifications of this for perceptions of the relational gender identities which she and Henry VI embodied together.

is an essential resource for students of gender and medieval history.

Lewis’s work makes a major contribution to the history of kingship and of gender. This is an exemplary study that blends the political and the cultural in a groundbreaking study of two of the most crucial characters in later medieval English history. Mark Ormrod, University of York, UK

"[This book] is written in an engaging but impeccably scholarly manner and will be of interest to medieval
historians and historians and theorists of gender." -Thomas Ward, Loyola Marymount, USA

"There is much to commend Katherine J. Lewis' book and the scholarship is careful and engaging in style…a very welcome addition to the study of masculinity and kingship." -Kirsten Fenton

"The work’s focus on masculinity and gender theory provides an original perspective which allows us to see familiar events in a new light, but its analysis is always grounded in the primary sources and based on an awareness of the biases, omissions and shortcomings of the surviving evidence... Both for the originality of its overall approach and for the insights of its detailed analysis, it should be read by anyone with an interest in medieval English political life." - S. H. Rigby in English Historical Review

"This will be an invaluable book for anyone wishing to introduce politics into an undergraduate or graduate course on gender history, or gender into a course focused on politics."
Christopher Fletcher in Gender & History