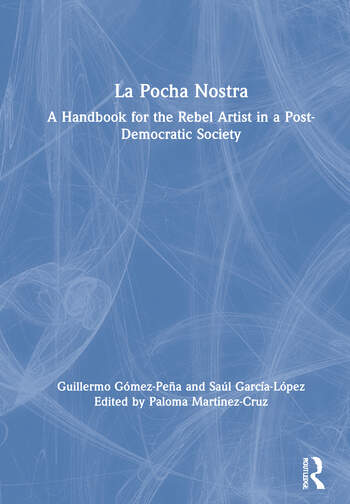 La Pocha Nostra: A Handbook for the Rebel Artist in a Post-Democratic Society

La Pocha Nostra: A Handbook for the Rebel Artist in a Post-Democratic Society marks a transformation from its sister book, Exercises for Rebel Artists, into a pedagogical matrix suited for use as a performance handbook and conceptual tool for artists, activists, theorists, pedagogues and trans-disciplinary border crossers of all stripes.

Featuring a newly reworked outline of La Pocha Nostra's overall pedagogy, and how it has evolved in the time of Trump, cartel violence and the politics of social media, this new handbook presents deeper explanations of the interdisciplinary pedagogical practices developed by the group that has been labelled "the most influential Latino/a performance troupe of the past ten years."

Chapter 1 "Pochology" in a Post-Democratic Society; Chapter 2 Soundscapes for dark times: a border pedagogy for resistance; Chapter 3 The 2019 Pocha Nostra Manifesto for a "Post-Democratic Era"; Chapter 4 What to Expect from a Pocha Workshop; Chapter 5 Important Notes to Producers and Workshop Facilitators; Chapter 6 Notes to Workshop Participants; Chapter 7 Radical Pedagogy for a Post-Democratic Society;Chapter 8 Performance Exercises, Rituals, and Games to Cross Borders; Chapter 9 With Love from the Trenches: Further Techniques and Reflections from Pocha and our Partners in Crime; Chapter 10 Sound Outs for Radical Inclusion: Poetry and Testimony unleashed by the Pocha Method

Guillermo Gómez-Peña is a performance artist, writer, activist, and educator. He is the author of 12 books including Ethno Techno and Dangerous Border Crossers. His classic performance pieces include "Border Brujo" (1988), "The Cruci-fiction project" (1994), "Mexterminator" (1997-99). He is founder and co-director of La Pocha Nostra.

PhD, is an Associate Professor of Latinx Cultural and Literary Studies at The Ohio State University. Her single-authored books include Women and Knowledge in Mesoamerica: From East L.A. to Anahuac (2011) and Food Fight! Millennial Mestizaje Meets the Culinary Marketplace (2019).

"La Pocha Nostra’s reputation in the performance art world precedes them. They’ve led rebel artist pedagogical workshops internationally under the leadership of Guillermo Gómez-Peña. Their core members have made history with their performances on the entrenched stereotypes surrounding Latino cultures. There is always an overtone of humor and drama in their spectacle. Also, there is always an opportunity for the viewer to get involved, to make a fool of themselves, to reveal their own vulnerability or to refute the performance altogether. Above all, members of La Pocha are image-makers – politicizing the well-known tropes of Latinidad for our Instagram and social media times. The gaze is paramount." - Rashayla Marie Brown, Chicago Performance.

" Observations of the self as a result of the workshop:

a. My body felt stronger, with improved alignment and increased flexibility.

b. Artistically extroverted within two weeks!

c. Further developed my ability to think in images first.

d. Improved my ability to improvise and respond to others. Discovered aspects of the self and the personae that lie beneath . . .

f. Further developed my ability to analyze and reflect on what we do.

"La Pocha Nostra’s work mobilizes the striking accusation that the work of an artist is the work of the anticolonial anti-authoritarian feminist revolutionary. Everyone — especially every artist — is implicated in the work of empire, racism, sexism, and homophobia. And it is the artist’s work to critically examine and practice an active resistance. For LPN, it is the staging of images — images of desire, pain, spectacle, stereotype, wickedness, and rage. These images are open to be made with the audience. LPN invites us to look, act, engage, struggle. There is no way out. We are trapped in the image, and trapped to make a decision. This is the work of performance art. By extension, this is the work of LPN." - Sampada Aranke, Art History Professor and Performance Studies Theorist

"Engaging in such a revolutionary practice, the work of La Pocha Nostra and the pedagogy is to provide containment, to hold a safe, strong, conscious space of Radical Tenderness and fearless exploration and expression, in which we discover and reclaim the borderlands of our primal imagination." - Leni Hester, US, Participant of Santa Fe Intensive 2017