Lacanian Affects
The function of affect in Lacan's work 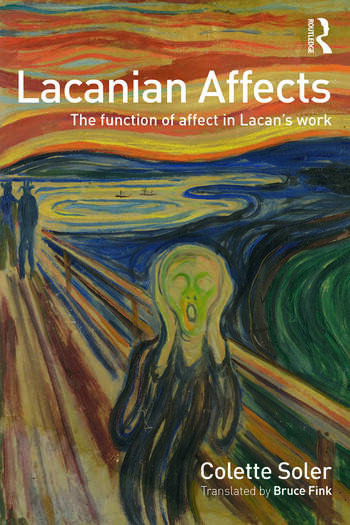 Lacanian Affects: The function of affect in Lacan's work

Affect is a high-stakes topic in psychoanalysis, but there has long been a misperception that Lacan neglected affect in his writings. We encounter affect at the beginning of any analysis in the form of subjective suffering that the patient hopes to alleviate. How can psychoanalysis alleviate such suffering when analytic practice itself gives rise to a wide range of affects in the patient’s relationship to the analyst?

Lacanian Affects: The Function of Affect in Lacan’s Work

, is the first book to explore Lacan’s theory of affect and its implications for contemporary psychoanalytic practice. In it, Colette Soler discusses affects as diverse as the pain of existence, hatred, ignorance, mourning, sadness, "joyful knowledge," boredom, moroseness, anger, shame, and enthusiasm. Soler’s discussion culminates in a highlighting of so-called enigmatic affects: anguish, love, and the satisfaction related to the end of an analysis.

provides a unique and compelling account of affect that will prove to be an essential text for psychoanalysts, psychiatrists, psychotherapists, psychologists, and social workers.

1. In the Beginning Was Freud

2. Anguish Reconsidered from the Other Side

4. The Lacanian Series of Affects

encounter with the teaching of Jacques Lacan led her to undergo analytic training, and she has been practicing and teaching psychoanalysis since 1975, most recently in the context of the School of the Forums of the Lacanian Field, which she founded. Her primary fields of study were philosophy and psychopathology, and she has taught both of these at the university level.

"Here Colette Soler shows you a Lacan "Inside Out." Whereas the animated film by Pixar plays on five emotions only (joy, sadness, fear, disgust, and anger), Soler examines a full array of affects in their Lacanian avatars: anguish, pain, sadness, joy, guilt, boredom, moodiness, anger, shame, love, enthusiasm, among others. Her zesty approach to Lacanian psychoanalysis revises received ideas about the performative and emotional reach of psychoanalysis. This repositioning of affects will have a lasting effect on the contemporary theory of the unconscious." - Patricia Gherovici, psychoanalyst and author

"In this elegantly written book, Colette Soler responds to the demand for a theory and technique for working with affects in the twenty-first century clinic. Soler walks the reader through the details of Jacques Lacan’s theory of affects as it developed throughout his career. By grounding concepts such as transference and the end of analysis in the work of Freud and others, she’s able to show in detail the startling new directions that Lacan took in his work on them. Throughout, she presents stimulating examples that illustrate the usefulness of Lacan’s thinking across a wide range of clinical practice.

Soler’s book is a long-needed contribution to the Lacanian literature and deals squarely with the accusation that Lacan paid little attention to affects. She spends a significant portion of the book on the affect of anguish, to which Lacan devoted an entire year of his seminar, and she details the relation of anguish to the object, to discourse, and to the real. Painstakingly reconstructing the edifice of Lacan’s theory, Soler is able to show that by the end of his career, a theory of affects is actually necessary for understanding the singularity of the speaking being in analysis. The late Lacanian clinic becomes a practice of deciphering the signifiers that determine the multiple and intimately particular affects of the Borromean subject. But it also involves an encounter with the enigmatic affects manifested in the real unconscious, independent of decipherable meaning. Soler shows that targeting this latter type of affects in analysis is indispensible to the necessary separation that enables the analysand to finish analysis and to become an analyst for someone else.

Soler’s writing is miraculously methodical. Just as the reader’s next half-formed question arises, she anticipates it, addresses it, and transforms it into a new idea that advances the theory and technique of psychoanalysis. As one would expect from someone of Colette Soler’s stature and experience, Lacanian Affects—meticulously translated by Bruce Fink—provides provocative reading for well-trained Lacanians, but it can also be read profitably by mental health professionals of various orientations, who will find that Lacan’s thinking on affects will add immeasurably to their clinical repertoire." - Judith Hamilton, MD, Psychiatrist and Psychoanalyst in private practice in Toronto, Canada. Member of the Toronto Psychoanalytic Society and teacher in the TPS Advanced Training Program in Psychoanalytic Psychotherapy. Co-Founder of Lacan Toronto, Member of the Stockbridge Lacanian Clinical Forum and of the Affiliated Psychoanalytic Workgroups (APW)