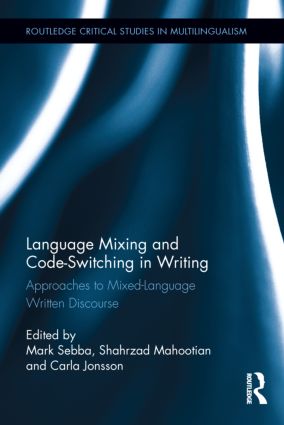 Language Mixing and Code-Switching in Writing

"Code-switching," or the alternation of languages by bilinguals, has attracted an enormous amount of attention from researchers. However, most research has focused on spoken language, and the resultant theoretical frameworks have been based on spoken code-switching. This volume presents a collection of new work on the alternation of languages in written form.

Written language alternation has existed since ancient times. It is present today in a great deal of traditional media, and also exists in newer, less regulated forms such as email, SMS messages, and blogs. Chapters in this volume cover both historical and contemporary language-mixing practices in a large range of language pairs and multilingual communities.

The research collected here explores diverse approaches, including corpus linguistics, Critical Discourse Analysis, literacy studies, ethnography, and analyses of the visual/textual aspects of written data. Each chapter, based on empirical research of multilingual writing, presents methodological approaches as models for other researchers. New perspectives developed in this book include: analysis specific to written, rather than spoken, discourse; approaches from the new literacy studies, treating mixed-language literacy from a practice perspective; a focus on both "traditional" and "new" media types; and the semiotics of both text and the visual environment.

"A laudable collection of articles in terms of showcasing viable methodologies for researching multilingualism in general, and written language mixing in particular… Overall, the book is a great resource for anyone interested in studying multilingual semiotic practices in the written medium." - LINGUIST List

Mark Sebba is Reader in Sociolinguistics and Language Contact at Lancaster University.

Shahrzad Mahootian is Professor of Linguistics at Northeastern Illinois University.

Carla Jonsson is Assistant Professor of Languages and Language Development at Stockholm University.

Routledge Critical Studies in Multilingualism is devoted to the publishing of original research, of global scope and relevance, which incorporates critical and post-structuralist perspectives. The series also seeks to reflect different strands of empirical work which are interpretive, ethnographic and multimodal in nature and which embrace new epistemologies and new research methods.