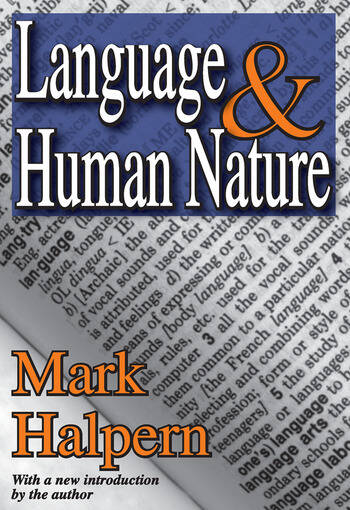 "Language and Human Nature" exposes a century's worth of flawed thinking about language, to exhibit some of the dangers it presents, and to suggest a path to recovery. It begins by examining the causes of changes in the English vocabulary. These sometimes take the form of new words, but more often that of new senses for old words. In the course of this examination, Halpern discusses a wide variety of verbal solecisms, vulgarisms, and infelicities generally. His objective is not to deplore such things, but to expose the reasons for their existence, the human traits that generate them.A large part of this book is devoted to contesting the claims of academic linguists to be the only experts in the study of language change. Language is too central to civilized life to be so deeply misunderstood without causing a multitude of troubles throughout our culture. We are currently experiencing such troubles, a number of which are examined here. The exposure of linguists' misunderstandings is not an end in itself, but a necessary first step in recovery from the confusion we are now enmeshed in.The picture of the relationship between words and thoughts that is part of the attempt to deal with language "scientifically" is partly responsible for dangerous cultural developments. The attempt by linguists to treat their subject scientifically makes them view meaning as an irritating complication to be ignored if possible. It turns them into formalists who try to understand language by studying its physical representations, with a resort to semantics only when unavoidable. With words practically stripped of their role as bearers of meaning, it becomes easy to see them as unimportant. Halpern's book is a serious critique of such oversimplified theorizing.

Chapter 1: The Question of Change in Language
The root of the confusion: why does language change?
Six common ways in which we change language
Why linguists are champions of change
How linguists account for the usability of language
despite constant change
If linguists approve of all changes, why don’t they
adopt them?
Change versus changes — too subtle a distinction?

Chapter 2: How Language is Studied Today
Building on air: phonology as the basis of ‘linguistic science’
The sound and the fury — does it signify anything?
The demeaning of meaning
The project of modern linguistics: building the Golem
Symptoms of trouble in the Golem project
Are sentences regular components of speech?
Does ambiguity present opportunities for Golem-building?
Is it a virtue in a grammar to be infinitely productive?

Chapter 3: Linguistic Authority: Rules,
Dictionaries, and Teaching
Rules in the classroom
The proper role and use of rules
Orwell’s rules: the exception to the rule?
Dictionaries and usage guides: filling the power vacuum
A dialogue with a dictionary editor
The special case of the OED
A step toward rescuing the dictionary
The attack on Roget’s Thesaurus

Chapter 5: The Eskimo Snow Vocabulary
Controversy — A Case Study
The background of the case
A linguist punctures a myth, at some cost in facts and logic
Metic terms: not all words are created equal
What is a ‘word’? Does it matter?
Need a snow-related term be exclusively
snow-related to count?
Need a rich snow vocabulary subject Eskimos to
Sapir-Whorf ignominy?
Should Eskimos be called ‘Eskimos’?
The facts retaliate by puncturing the linguist

Chapter 6: A Peoples’ Linguistics
A peoples’ linguistics
On becoming a spokesman for The People
Is anyone in charge here? Need anyone be?
The language gang flaunts its colors and fights for its turf
Racism, sexism, and other isms: the fight gets ugly


Chapter 7: Restoring Rhetoric to Its Throne
If it’s not hard to read, it can’t be important:
an apologia for bad writing
Rhetoric and the relation of thought to language
Fixing on the right metaphor
Thinking without words
The anti-rhetorical tradition
The decline of rhetoric and the decline of fiction

Chapter 8: Decadence and Diseases of Language
Two flavors of decadence: hothouses and
means-become-ends
When language is no longer a tool for dealing with
reality, but an alternative to it
Language decadence engenders a strange muse
Marrying Ms. Cthulhu
Subverting the subversives: the unspeakable
remarks of Philip Larkin
Denial of objectivity: the first refuge of a scoundrel

Chapter 10: What is To Be Done?
Where will linguists and their projects go?
Who inherits, or reclaims, stewardship of the language?
What principles will the new language stewards adopt?
Sample applications of the principles, with
derivation of secondary rules
What will the world be like when all this is done?

Appendix A: Linguistics as a Science
How did linguistics come to be regarded as a science?
Why linguistics isn’t a science, and won’t become one

Appendix B: Active Eskimo-Language Terms
for Snow and Ice

Appendix C: AI and the Golem project — the
reverse-engineering twins
The Golem and the Hidden Entity of the Turing Test:
brother monsters
Some programming language analogues to natural
language features

Appendix D: Notes on Chomsky and the
Chomskyan literature
To learn more about Chomskyan linguistics&n