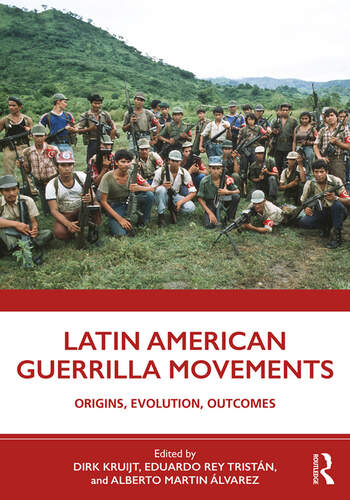 Organized around single country studies embedded in key historical moments, this book introduces students to the shifting and varied guerrilla history of Latin America from the late 1950s to the present. It brings together academics and those directly involved in aspects of the guerrilla movement, to understand each country’s experience with guerrilla warfare and revolutionary activism.

The book is divided in four thematic parts after two opening chapters that analyze the tradition of military involvement in Latin American politics and the parallel tradition of insurgency and coup effort against dictatorship. The first two parts examine active guerrilla movements in the 1960s and 1970s with case studies including Bolivia, Nicaragua, Peru, Argentina, Chile and Uruguay. Part 3 is dedicated to the Central American Civil Wars of the 1980s and 1990s in Nicaragua, El Salvador and Guatemala. Part 4 examines specific guerrilla movements which require special attention. Chapters include Colombia’s complicated guerrilla scenery; the rivalling Shining Path and Tupac Amaru guerrillas in Peru; small guerrilla movements in Mexico which were never completely documented; and transnational guerrilla operations in the Southern Cone. The concluding chapter presents a balance of the entire Latin American guerrilla at present.

Superbly accessible, while retaining the complexity of Latin American politics, Latin American Guerrilla Movements represents the best historical account of revolutionary movements in the region, which students will find of great use owing to its coverage and insights.

1. Origins and Evolution of the Latin American Guerrilla Movements

2. Cuba and the Latin American Left

Part 1: First Revolutionary Ripple: the imitation of the successful example

The Sixties and the Foco Guerrilla

3. Guerrilla Movements in the Dominican Republic

6. The Peruvian Guerrilla Movements of the 1960s.

Part 2: Second Revolutionary Ripple: the adaptation of a non-viable model

12. The Sandinista Guerrilla, Revolution and Legacy

13. The Revolutionary Movement in El Salvador

Singularities and Transversalities in the Insurgent Cycle

16. Sendero Luminoso, the MRTA, and the Peruvian Paradoxes

18. The Emergence of The Junta Coordinadora Revolucionaria: Historical Context and Political Process in The Southern Cone

19. A Balance of the Latin America Guerrilla

is Professor Emeritus of Development Studies at Utrecht University, and currently is a research fellow at the Instituto Universitário de Lisboa and at the Centre for Military Studies at Stellenbosch University, South Africa. He has published widely about military governments and revolutions; insurgency and counterinsurgency; and urban violence and non-state actors. He has been a visiting scholar at universities and research institutes in Latin America and Europe. In addition, he has been a policy advisor to the Netherlands Ministry of Foreign Affairs, assigned to Latin America on multiple occasions. His most recent monograph is Cuba and Revolutionary Latin America (2017); Ethnography as Risky Business: Field Research in Violent and Sensitive Contexts (2019) was published in coedition with Kees Koonings.

is Full Professor of Latin American History at the University of Santiago de Compostela, Spain. After completing his PhD on the guerrilla movements in Uruguay, he has specialized in political violence and contemporary Latin American revolutionary movements. He has carried out long-time field research in the Rio de la Plata region and Central America. He is cofounder and coordinator of the Revolutionary New Left International Research Network on Political Violence. He has published monographs, articles and book chapters in several European and American countries, among them: La Izquierda Revolucionaria Uruguaya, 1955–1973 (2006), and Revolutionary Violence and The New Left: Transnational Perspectives (coedited with Alberto Martín, New York: Routledge, 2016). He is currently working on a political biography of the Italian left-wing editor and activist Giangiacomo Feltrinelli (expected in 2020).

Alberto Martín Álvarez holds a PhD on Latin American Studies from the Universidad Complutense de Madrid. He is currently Distinguished Professor at the Department of Public Law of the Universitat de Girona (Spain). He has been full professor at the Instituto Mora (Mexico City) and visiting researcher at several universities and research centers in Europe and Latin America. He is cofounder and coordinator of the Revolutionary New Left International Research Network on Political Violence. He has also undertaken extensive research on the origins and development of the Salvadoran revolutionary left. Among his main publications are: Revolutionary Violence and the New Left: Transnational Perspectives (London: Routledge, 2016, with Eduardo Rey, eds.) and the monograph From Revolutionary War to Democratic Revolution: The Farabundo Martí National Liberation Front (FMLN) in El Salvador (2010).

"This volume comes from the hand of three of the best researchers on revolutionary movements in Latin America. The time elapsed and the partial end of the last guerrilla violence in Colombia with the accumulated knowledge allow the rigorous research that is reflected in this book." Manuel Alcántara, Full Professor, University of Salamanca, Spain and Director of FLACSO Spain

"A pioneering, comprehensive, analytical book on guerrillas / insurgency in Latin America and the Caribbean. The Cold War and the guerrillas set the way for political systems in the region and beyond. Counterinsurgency and guerrilla wars left narrow margins for democratic developments in Latin America between 1959 and 1990. A profound observation on twelve national cases. A new and excellent contribution from Dirk Kruijt, Eduardo Rey Tristán and Alberto Martín Álvarez." Francisco Rojas Aravena, Rector of the United Nations University for Peace, Costa Rica

"The editors have compiled a well written and much needed comprehensive scholarly analysis of the Latin American revolutionary guerrilla movements that played a crucial role in the political history of the region in the 20th century. It is particularly important that they have acknowledged the seminal role played by Cuba in this process." Gary Prevost, Professor Emeritus of Political Science, College of St. Benedict and St. John’s University, USA

"This impressive collection of essays improves our understanding of the origins, evolution, and outcomes of Latin America’s guerrilla movements. The volume brings together a top-notch group of political scientists, historians, and sociologists from Latin America, the United States, and Europe, who have dedicated their professional lives to the study of the region’s New Left. It should be on everyone’s reading list." Michael E. Allison, Professor and Chair, Department of Political Science, The University of Scranton, USA

"Nothing exemplifies the tensions and contradictions of Latin America’s quest for peaceful coexistence better than the history of the guerrilla movements that dominated its political life in the second part of the 20th century. Kruijt, Rey Tristán and Martín Álvarez have brought together a volume offering the most comprehensive overview so far of a phenomenon that in its origins, development, demise and aftermath expresses the troubled dynamic between democratization and violence that in different ways continue to plague Latin America society as it enters a new millennium." Bernardo Arévalo de León, Latin American Director of Interpeace

"The book Latin American Guerrilla Movements: Origins, Evolution, Outcomes, edited by Dirk Kruijt, Eduardo Rey Tristán and Alberto Martín Álvarez, will become a must-have for researchers, students and those interested in guerrilla action and revolutionary political violence in Latin America. Through 18 chapters written by experts, the work analyzes the different guerrilla waves experienced by Latin America both nationally and from a regional perspective. It is an essential collective work to get an understanding of the ‘spirit of the political age’ that infected Latin America since the Cuban Revolution, and which involved more than four decades of guerrilla activity." Salvador Martí i Puig, Coordinador del Grau de Ciència Política i de l'Administració, University of Girona, Spain

"This book is an essential guide to an extraordinary period of recent history, one in which two generations of young Latin Americans took up arms as guerrillas in the hopes of seizing power and building Utopian futures in their countries. For historians, scholars, diplomats, and anyone else seeking an authoritative analysis of the revolutionary wave that convulsed Latin America from the 1950s to the 1990s, Latin American Guerrilla Movements is certain to become indispensable reading." Jon Lee Anderson, author of Che Guevara: A Revolutionary Life

"We are faced with a book that, clearly, was very necessary. Aimed at a plural audience, whether experts in the field or people interested in the Latin American guerrilla phenomenon, the added value of this work is twofold. On the one hand, the work proposes the diverse and complex analysis of the guerrilla phenomenon. The authors observe both the stages through which the armed struggle takes place in Latin America—from the 1960s to the 1990s—as well as the specificities shown by the Central American, Andean and Southern Cone scenarios, among others. The above, without incurring the traditional functionalist bias. Also, the work is markedly pedagogical. It perfectly integrates a rigor and depth in the analysis with a simple and illustrative language." Jerónimo Ríos Sierra, Universidad Complutense de Madrid, Professor of Political Geography, Geopolitics, and Latin American Studies, Universidad Complutense de Madrid, Spain

"Unparalleled in scope and depth, this comprehensive volume offers scholars, students, and broader audiences a authoritative understanding of the cycle of guerrilla movements and leftist revolutionary projects in Latin America during the second half of the twentieth century. The book brilliantly explores and explains the genesis and dynamics of these movements, speaking to their enduring relevance for Latin American politics into our present time." Kees Koonings, Associate Professor of Anthropology and Development Studies, Utrecht University, the Netherlands

"In this fine collaboration, the three editors now unite their own formidable writings on revolutionary groups and trajectories in several Latin American nations with the fine contributions of many other scholars. The result is a book which raises the scholarly bar, to a new tier of both depth and excellence in studies of the region’s guerrilla activism. Taken as a group, the sheer region-wide scope is reason enough to celebrate the book. Yet taken as individual offerings, riches abound in the chapter-by-chapter arguments and evidence laid out by this assemblage of careful scholars. Many root their arguments in interviews and other primary-source materials not previously explored, which provide newer and firmer groundings for their national studies. And each chapter is never less than original and excellent in analysis of the revolutionary case(s) that it explores." Timothy Wickham-Crowley, Georgetown University, USA

"Dirk Kruijt, Eduardo Rey Tristán and Alberto Martín Álvarez gather a group of Latin American, European and American specialists, with the goal of telling the story of guerrilla movements in Latin America, from the 1950s to date. Besides taking a historic walk through the years of the Cold War in Latin America from the triumph of the Cuban revolution, highlighting political and social processes, one of the main contributions of this book is that it provides an analysis on the origins and evolution of political violence in the different regions and countries of the subcontinent: Central America, the Andean region, the Southern Cone, the Caribbean, Brazil and Mexico. Its originality stands not only in that it offers a compared perspective from new views, but it also makes a balance of the achievements and limitations of the guerrilla movements in Latin America in the second half of the 20th century." Mónica Toussaint, Senior Research Professor, Instituto Mora, México City