Law And Technology In The Pacific Community 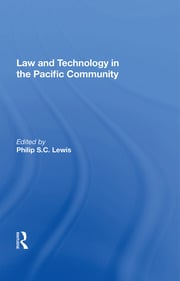 Law And Technology In The Pacific Community

This book focuses on the high technology industries of the Pacific and the legal institutions and occupations with which they are involved. It is an essential book for scholars of international political economy and trade.

Introduction Part One: Approaches from Social Science 1. Law, Legal Institutions, and Economic Development The Thomas Theorem of Mega Lawyering 2. Computers, Competition, and the Revitalization of the U.S. Patent System 3. Part Two: The Internationalization of the Legal Profession 4. The International Legal Community in the Pacific Basin 5. The Growth of the Bar and the Changes in the Lawyer's Role Part Three: Law and Institutions on the Pacific Rim 6. The Role of Government and Lawyers in the Development of the Semiconductor/Computer Industry in Japan 7. The Role of Lawyers in the Economic Development of Korea 8. Litigation in Silicon Valley Industries Part Four: Property Rights in an Advanced Capitalist Economy 9. Lochner v. New York in Japan: Protecting Economic Liberties in a Country Governed by Bureaucrats 10. Administrative Control of Japanese Judges Part Five: Education for the New Lawyer 11. Challenges to Legal Education in Korea 12. Legal Education in Japan 13. Implications of International Legal Integration for Law Teaching