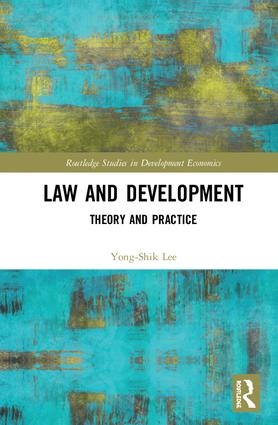 'Yong-Shik Lee is moving the study of law and development to a new paradigm which more fully takes on board the insights of institutional economics along with a growing awareness of the issue of state capacity. He understandably has much to say about the East Asian model but his focus is not confined to this important case. He takes a close look at South Africa after the end of Apartheid and, strikingly, examines the contemporary US through a developmental lens. The reader will find much to enjoy and to learn from in this book.' — Dr. Simon Deakin, Professor of Law, University of Cambridge

'This book is a very well-written, ambitious and thought-provoking account and treatment of a very complex topic. The theory captures central elements of what makes up the connection between law and development.' — Dr. Philipp Dann, Professor of Law, Humboldt University

'With this new book Yong-Shik Lee has succeeded in providing scholars and students with a robust and insightful analytical framework to re-launch Law and Development as an exciting field of academic research and study. Prof. Lee adopts a universal approach that enables his framework to be used as an analytical framework to discuss the issues related to social and economic inequality and development in developing and developed countries. This is an essential book for both scholars of law and development studies and policy makers.' — Dr. Faizel Ismail, Former Ambassador of South Africa to the World Trade Organization

Part I: Law and Development in Theory

1. Introduction: What Is Law and Development?

2. Evolution of Law and Development

3. General Theory of Law and Development

4. Law and Development in South Korea

5. Law and Development in South Africa

6. Application of the Law and Development Approach in the United States

Yong-Shik Lee is a scholar in law and development. He is currently the Director of the Law and Development Institute. Lee has taught at leading universities throughout the United States, Europe, Asia, and Australia, including New York University, University of Manchester, and University of Sydney. He graduated in economics with academic distinction from the University of California at Berkeley and received law degrees from the University of Cambridge (BA, MA, PhD). He is author of Reclaiming Development in the World Trading System (Cambridge University Press, 2006, 2009, 2016), Microtrade: A New System of Trade Toward Poverty Elimination (Routledge, 2013, 2015), Law and Development Perspective on International Trade Law (Cambridge University Press, 2011, 2013), and Safeguard Measures in World Trade: The Legal Analysis (Edward Edgar, 2003, 2005, 2007, 2014), He has published over eighty scholarly articles, book volumes, chapters, and shorter notes in the areas of law and development, international economic law, comparative law, and international commercial arbitration with leading publishers in North America, Europe and Asia. He has also frequently spoken on issues of law and development, international economic law, and the WTO.