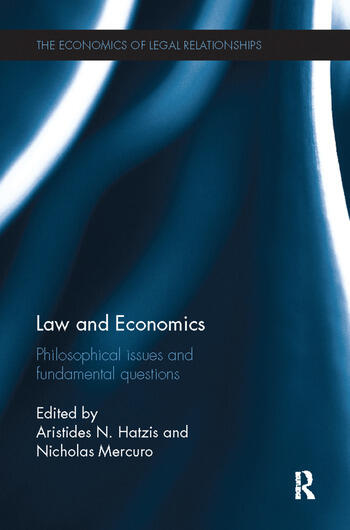 The Law and Economics approach to law dominates the intellectual discussion of nearly every doctrinal area of law in the United States and its influence is growing steadily throughout Europe, Asia, and South America. Numerous academics and practitioners are working in the field with a flow of uninterrupted scholarship that is unprecedented, as is its influence on the law.

Academically every major law school in the United States has a Law and Economics program and the emergence of similar programs on other continents continues to accelerate. Despite its phenomenal growth, the area is also the target of an ongoing critique by lawyers, philosophers, psychologists, social scientists, even economists since the late 1970s. While the critique did not seem to impede the development of the field, it certainly has helped it to become more sophisticated, inclusive, and mature. In this volume some of the leading scholars working in the field, as well as a number of those critical of Law and Economics, discuss the foundational issues from various perspectives: philosophical, moral, epistemological, methodological, psychological, political, legal, and social.

The philosophical and methodological assumptions of the economic analysis of law are criticized and defended, alternatives are proposed, old and new applications are discussed.

The book is ideal for a main or supplementary textbook in courses and seminars on legal theory, philosophy of law, jurisprudence, and (of course) Law and Economics.

1. Norms and Values in the Economic Approach to Law 2. Flawed Foundations: The Philosophical Critique of (a Particular Type of) Economics 3. Norms and Values in the Study of Law 4. The Dominance of Norms 5. From Dismal to Dominance? 6. Beyond The Law-And-Economics Approach – From Dismal To Democratic 7. Functional Law and Economics: The Search for Value-Neutral Principles of Lawmaking 8. Law & Economics: Systems of Social Control, Managed Drift, and the Dilemma of Rent Seeking in a Representative Democracy 9. Autonomy, Welfare, and the Pareto Principle 10. Any Normative Policy Analysis Not Based on Kaldor-Hicks Efficiency Violates Scholarly Transparency Norms 11. Law and Economics, the Moral Limits of the Market, and Threshold Deontology 12. Moral Externalities: An Economic Approach to the Legal Enforcement of Morality 13. Engagement with Economics: The New Hybrids of Family Law/Law & Economics Thinking 14. The Figure of the Judge in Law and Economics 15. Behavioral Law and Economics: Its Origins, Fatal Flaws, and Implications for Liberty

Aristides N. Hatzis is an Associate Professor of Legal Theory at the University of Athens, Greece.