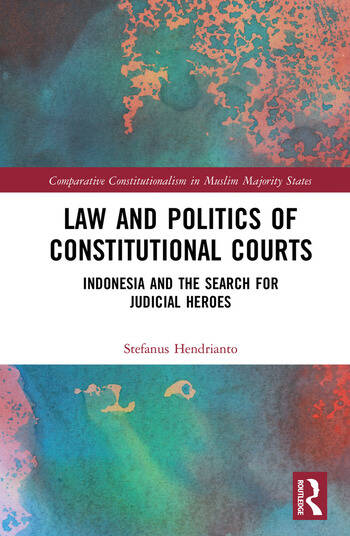 Law and Politics of Constitutional Courts: Indonesia and the Search for Judicial Heroes

This book critically evaluates different models of judicial leadership in Indonesia to examine the impact that individual chief justices can have on the development of constitutional courts. It explores the importance of this leadership as a factor explaining the dynamic of judicial power. Drawing on an Aristotelean model of heroism and the established idea of judicial heroes to explore the types of leadership that judges can exercise, it illustrates how Indonesia’s recent experience offers a stark contrast between the different models. First, a prudential-minimalist heroic chief justice who knows how to enhance the Court’s authority while fortifying the Court’s status by playing a minimalist role in policy areas. Second, a bold and aggressive heroic chief justice, employing an ambitious constitutional interpretation. The third model is a soldier-type chief justice, who portrays himself as a subordinate of the Executive and Legislature. Contrary perhaps to expectations, the book’s findings show a more cautious initial approach to be the most effective. The experience of Indonesia clearly illustrates the importance of heroic judicial leadership and how the approach chosen by a court can have serious consequences for its success. This book will be a valuable resource for those interested in the law and politics of Indonesia, comparative constitutional law, and comparative judicial politics.

2. The Birth of the Constitutional Court: A Joke that turned Serious; 3. A Heroic Intellectual Leadership; 4. (Un)Heroic Quasi-Weak-Form Review; 5. A Heroic Social Leadership;

6. After the Heroic Court: The Second Generation Decline? 7. Miscarriage of Chief Justices: The Anti-Heroes; 8: A Good Hero is Hard to Find: Towards a Less Heroic Court?

'With rare exceptions, such as the courts headed by John Marshall and Earl Warren, it was not common until recently to explain the work-product of constitutional courts by focusing on their leadership. Now, however, a number of writers have begun to emphasize the importance of the chief justice in guiding courts to be bold or cautious, expansive or restrictive, in their constitutional decisions. With his extensive knowledge and with great judiciousness, Stefanus Hendrianto has examined the important role of chief justices of the Constitutional Court of Indonesia. He shows convincingly that leadership can indeed make a major difference in the emergence of constitutional doctrine, as he examines the work of the Court and compares it to similar courts elsewhere. This is an important work of comparative constitutional law and politics that will repay careful study.'

'This fascinating study of the Indonesian Constitutional Court introduces an entirely new concept for understanding judicial power: the judge as a heroic figure. Providing an exhaustive account of the Court’s successes and failures, Hendrianto makes a powerful case for the role of judicial leadership in new democracies.'

`Hendrianto’s careful account of the Constitutional Court’s role in Indonesian constitutional law and politics provides us with a richly-layered account that helps contextualize the paths forward, while adding to broader understandings of the dynamics of judicial leadership and judicial power in constitutional democracies.’