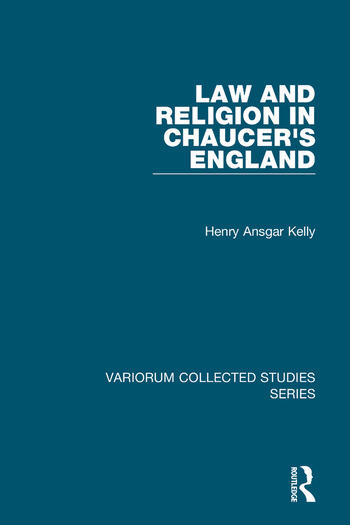 These essays, in a second collection by Professor Kelly, investigate legal and religious subjects touching on the age and places in which Geoffrey Chaucer lived and wrote, especially as reflected in the more contemporary sections of the Canterbury Tales. Topics include the canon law of incest (consanguinity, affinity, spiritual kinship), the prosecution of sexual offences and regulation of prostitution (especially in the Stews of Southwark), legal opinions about wife-beating, and the laws of nature concerning gender distinction (focusing on Chaucer's Pardoner) and the technicalities of castration. Sacramental and devotional practices are discussed, especially dealing with confession and penitence and the Mass. Chaucer's Prioress serves as the starting point for a treatment of regulations of nuns in medieval England and also for the presence, real and virtual, of Jews and Saracens (Muslims and pagans) in England and conversion efforts of the time, as well as sympathetic or antipathetic attitudes towards non-Christians. Included is a case study on the legend of St Cecilia in Chaucer and elsewhere, and as patron of music; and a discussion of canonistic opinion on the licit limits of medicinal magic (in connection with the ministrations of John the Carpenter in the Miller's Tale).

Contents: Introduction; Part A Sex/Gender: Shades of incest and cuckoldry: Pandarus and John of Gaunt; Bishop, prioress, and bawd in the stews of Southwark; Medieval laws and views on wife beating; The Pardoner's voice, disjunctive narrative, and modes of effemination. Part B The Sacraments: Sacraments, sacramentals, and lay piety in Chaucer's England; Penitential theology and law at the turn of the 15th century. Part C Non-Christians and England: Jews ands Saracens in Chaucer's England: a review of the evidence; 'The Prioress's Tale' in context: good and bad reports of non-Christians in 14th-century England; Chaucer's Knight and the northern 'crusades': the example of Henry Bolingbroke. Part D Case Studies: A neo-revisionist look at Chaucer's nuns; How Cecelia came to be a saint and patron (matron?) of music; Canon law and Chaucer on licit and illicit magic; Addenda and corrigenda; Index.

'A valuable collection of eleven influential and deeply learned essays published since 1991 by one of the most distinguished scholars of medieval English literature and culture.' Medium Aevum '... throughout the volume Kelly engages imaginatively, energetically, and rigorously with a variety of questions. For the work presented here, and for his broader contributions to scholarship on the English Middle Ages, we will remain in his debt.' Journal of Anglican and Episcopal History