Lean for the Long Term
Sustainment is a Myth, Transformation is Reality 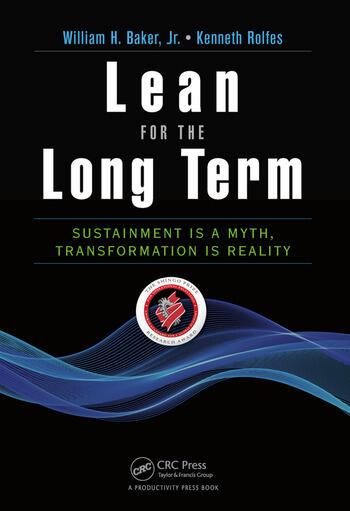 Lean for the Long Term: Sustainment is a Myth, Transformation is Reality

The average tenure of a departing CEO has declined from approximately 10 years in 2000 to 8.1 years in 2012. Maintaining a customer-focused Lean strategy and continuous improvement culture can become a challenge when management changes often, unless it has become an institutionalized company-branded business management system for the company.

Lean for the Long Term allows readers to benefit from the operating experience and research of the authors who have been deeply involved in leading Lean transformations that last in today’s ever-changing business landscape. It presents a Lean management system model that encompasses leadership, process, and growth as the model to drive business performance.

The authors investigate the fragile nature of a Lean culture and the resulting effects on people and the company when the culture shifts. They illustrate the methods several companies have used to achieve successful Lean transformations that last and also offer guidance on how to build your own action plan based on the best practices outlined in the text.

Until now, there have been few books to supply in-depth discussions on Lean as a strategy and management system. Filling this need, this book will help you to move toward a broader, more strategic use of Lean principles in your business.

The book uses clear language to present insights on how company leaders and Lean practitioners can improve communication. After reading the book, you will better understand how your company operates, how to align your efforts, and how to decide what to do despite the complexity of day-to-day business operations.

Total Business Thinking Required
Leaders at Every Level
The Language Is Important
Learning the Language
Aligning Lean Speak with the Business Speak
Bilingual Language of Business
Your Company?

How Lean Fails
TPS outside of Toyota
CEO Transition and Change
Focus on the Business Model
So What Is a Lean Management System?
Your Company?

What the Board Should Know about Lean
Purpose, Authority, and Responsibility of the Board of Directors
So What Do We Want the Board to Do?
Organizational Alignment
Does the Board Set the Company Culture?
Extinction Is an Option
What a Lean Strategy Does
Amalgam Business Context
Takeaway Questions to Consider for Your Company
NCR Timeline

As a Lean Practitioner, What Your CEO Wants You to Know
Introduction
Identify the Customer Segments and Their Characteristics
Customer Value and Demand
Scope the Required Infrastructure
Describe the Future State and Actions to Get There
Results
Takeaways

Mr. Baker is a senior Shingo Prize examiner and was a key design contributor to the Lean certification process developed by AME-Shingo-SME and launched in 2006.

He was responsible for knowledge management, benchmarking, and the benchmarking process at both Texas Instruments and Raytheon from 1990 until 2004. He trained and conducted numerous benchmarking teams and projects, ranging from strategic to tactical focus. He led the Raytheon effort to benchmark Six Sigma strategies, including site visits to GE and Allied Signal. Under his leadership and planning, Raytheon received the MAKE (Most Admired Knowledge Enterprise) Finalist designation in the United States by Teleos in 2003 and was the North American winner in 2004, 2005, and 2006.

Earlier in his career he was the manufacturing manager on several high-profile missile/electronic systems, including Shrike, Paveway, Harpoon Seeker, TOW Night Sight, HARM, and Tacit Rainbow, as well as the Lunar Mass Spectrometer experiments on Apollo 15, 16, and 17. He was the U.S. Air Force engineering chief, responsible for evaluating satellite launches at Vandenberg AFB, California.

He has contributed articles to the National Productivity Review, Target, and Quality Progress, and his work has been featured in numerous books.

Ken Rolfes, president of KDR Associates, Inc., works with his customers to develop business performance improvement programs on a focused or enterprise-wide basis for service and manufacturing companies. He helps busi¬nesses craft and execute winning value creation and growth agendas that maximize the value of the business to its customers, employees, and shareholders.

Ken has more than 35 years senior operations management experience for public and private companies. He served as COO and VP in mid-cap and start-up companies and held key man-agement positions in product management, manufacturing, supply chain management, and quality assurance for NCR and Control Data. He has worked extensively with businesses that design, manufacture, and market technically based products for the medical device, industrial product, and computer industries and has guided organizations in aerospace, military, manufacturing, retail, and service industries.

Ken holds a BS in industrial engineering and a MBA in finance. He has presented at various industry and AME national conferences and at workshops, acted as contributing editor for Modern Woodworking magazine, and served as an instructor for San Diego State University in the Lean Enterprise Program. Ken currently serves as director of the Association for Manufacturing Excellence (AME).

Lean for the Long Term is one of the only books that presents Lean as a comprehensive business model and not just a set of tools in a toolbox. An engaging read that will help any company maximize its full business potential. It is a must-read for business leaders, C-suite executives, and board members.
—Luke Faulstick, Co-Owner, President, and CEO, PPI

Despite indisputable potential to transform any organization to great, most Lean transformations fail to get companies to their true potential. Even fewer are able to sustain world-class performance and continuing improvement for the long term. What we know beyond a shadow of a doubt is that leadership matters, and it really matters to Lean movements. Baker and Rolfes take the reader through a myriad of thoughtful analysis and recommendations on how to successfully transform an organization and its leadership, and keep it on a perpetual cycle of improvement.
—Dan McDonnell, VP Integrated Supply Chain, Ingersoll Rand

Finally, we see a book making the connection between what sometimes looks to be two different worlds in the business environment:, the strategy and execution/tactics. This is a topic that has not been openly discussed but definitely a vital one for the long run. A must-read for Lean practitioners, executives, and board members interested in how to address the differences in approach to set the foundation for a sustained Lean business implementation and create value in their businesses.
—Mauro G Gonzalez, Sr. Operations Manager, Littelfuse Inc.

Lean for the Long Term goes beyond the existing literature on Lean tools and philosophy to describe how to create a Lean transformation that is sustainable across the entire organization for the long haul. Of particular note are the discussions on why transformations fail, and implementation strategies from a variety of perspectives, such as CEO, board member, and Lean practitioner.
—Kevin Meyer, Co-Founder, Gemba Academy

A fine review of our Lean journey seen through the eyes of two execs who lived it. Together they cover the operating fundamentals supporting Lean, as well as great illustrations from Lean pioneers.
—Patricia E. Moody, Author and Manufacturing and Supply Management Consultant

This book offers valuable insight to use Lean as a management strategy where it can create a value culture that customers are willing to pay for. Lean is about honoring people, customers, and processes. This book is a must-have for anyone wanting to drive an organization through performance.
—Dale Crownover, President /CEO, Texas Nameplate Company, and Two-Time Winner of the Malcolm Baldrige National Quality Award