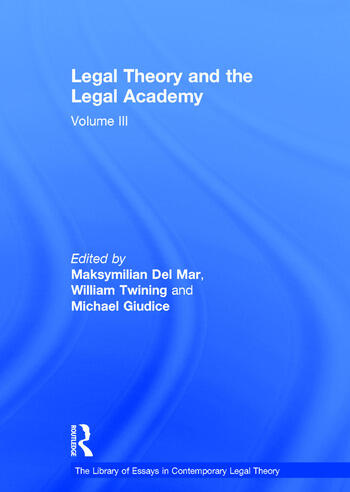 The third in a series of three volumes on Contemporary Legal Theory, this volume deals with four topics: 1) the role of legal theory in the legal curriculum; 2) the teaching of legal theory; 3) the relationship of legal theory to legal scholarship; and 4) the relationship of legal theory to comparative law. The focus of the first two topics is on the common law world, where the debates over the aims and proper place of legal theory in the study of law have traversed a good deal of ground since John Austin's 1828 lecture, 'The Uses and the Study of Jurisprudence.' These first two parts offer a selection of the most important papers, including surveys, as well as pedagogical viewpoints and particular course descriptions from analytical, critical, feminist, law-and-literature and global perspectives. The last three decades have seen just as many changes for legal scholarship and comparative law. These changes (such as the rise of empirical legal scholarship) have often attracted the attention of legal theorists. Within comparative law, the last thirty years have witnessed intense methodological reflection within the discipline; the results of these reflections are themselves properly recognised as legal theoretical contributions. The volume collects the key papers, including those by Neil MacCormick, Mark Van Hoecke, Andrew Halpin, William Ewald and Geoffrey Samuel.