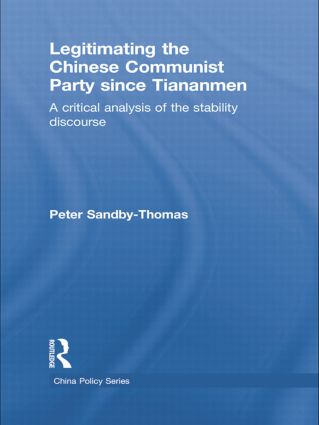 A Critical Analysis of the Stability Discourse, 1st Edition

The dominant view concerning the rule of the Chinese Communist Party (CCP) is that it is simply a matter of time before it comes to an end. This view has been dominant since the pro-democracy protests in 1989 and has only been strengthened by the increasing number of protests in recent years. However, the Chinese Communist Party has continued to remain in power throughout this period and its rule appears to be secure in the short-to medium-term. As the twentieth anniversary of the military suppression of the pro-democracy demonstrations approaches, this book explains how the Chinese Communist Party has maintained its authority since 1989. It provides a detailed analysis of the Party’s discourse emphasising stability in the post-Tiananmen period, analysing the government’s propaganda in order to show how this discourse has been used by the Party to legitimate its authority. The interdisciplinary nature of this book makes it relevant to a number of different academic disciplines including Asian studies, China studies, international relations, politics and sociology.

'In this book, Peter Sanby-Thomas argues that economic performance and nationalism, the two commonly identified sources of legitimacy for the Chinese Communist Party (CCP), are inadequate, and suggests an additional ideational source of legitimacy; namely, the use of stability discourse. […] Sandby-Thomas contends that such discourse is employed by the leadership together with nationalist and economic development discourses, and is therefore not solely responsible for maintaining the CCP’s legitimacy in China. It is hardly surprising that Chinese propaganda utilizes stability discourse to justify the CCP’s rule, as such rhetoric is common among the leaders of authoritarian systems, and it may seem to some readers that the book offers more insight about linguistics than about Chinese politics. Overall however, Sandby-Thomas’s application of linguistic theories in examining the stability discourse in China is interesting and refreshing.' – Dr. Chow Bing Ngeow, University of Malaya, Journal of Chinese Political Science / Association of Chinese Political Studies 2014

'Since the publication of this book, we have witnessed the crisis of Middle Eastern autocracy as well as the Jasmine Revolution in China. In both cases, the CCP has very audibly re-doubled its efforts to present itself as a stabilising force. This highlights the continued relevance of this book to the legitimacy discourse in China and the author should be congratulated in breaking new scholarly ground with this book.' – Robert Weatherley, Cambridge University, East Asia Journal (2011) 28:381–383

Peter Sandby-Thomas obtained his PhD in Politics and International Relations from the University of Nottingham, UK. His research is concerned with analysing the justification of power and focuses on Chinese politics in the post-Mao period.